ava
James Corden kicks off the show looking at the GRAMMYs lineup, from the believable to the very unbelievable acts. After, he dives into the headlines including good news about both COVID-19 relief and 100 million Johnson & Johnson vaccines being ordered. And everyone sings about salmon. 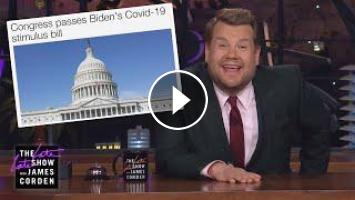 James Corden kicks off the show looking at the GRAMMYs lineup, from the believable to the very unbelievable acts. After, he dives into the headlines i...