Added 2 weeks ago by admin
18 Views
1947 Cadillac Series 62 Convertible Coupe
Sold For $126,500 Including Commission
RM | Sotheby's - AMELIA ISLAND, Florida 2015
Chassis No.8442708
Body No.4077
Cadillac’s only convertible in 1947
Fresh detailing of a body-off restoration
An AACA National First Junior winner at Hershey in 2014
Body Style 6267. 150 bhp, 346 cu. in. L-head V-8 engine, four-speed Hydra-Matic transmission, coil-spring independent front suspension, live rear axle with semi-elliptic leaf springs, and four-wheel hydraulic drum brakes. Wheelbase: 129 in.
All automobile manufacturers halted their assembly lines by February 1942, but none of them remained idle for very long. While most companies were converted to make aircraft parts or guns, Cadillac had the enviable position of keeping its engine production going in order to turn out tanks. Cadillac’s first M5 tank was delivered to the army in April 1942, and it was powered by two Cadillac V-8s with Hydra-Matic transmissions, with one driving each track. In all, the division built six types of tanks and gun carriers, resulting in some 12,000 fighting vehicles in all by the time hostilities ended in 1945.
Having its engine plant up and running gave Cadillac an advantage when automobile manufacture was allowed to resume. Although the 1946 Cadillac engines were of the same 346-cubic inch displacement as the pre-war powerplants and were rated at the same 150 horsepower, many internal parts had been re-engineered for greater strength and reliability as a result of the wartime experience. The Hydra-Matic had been beefed up as well.
Just as the 1946 models were a modest makeover of the pre-war ’42s, the 1947s that were introduced that January were a subtle freshening of the previous model year. There was more brightwork and modest grille and trim changes. The bold “egg crate” grille had one fewer horizontal bar, and parking lights became small round units, unless optional fog lamps were ordered. Rear fender shields, which were rubber on the ’46s, were now made of stainless steel. Particularly noticeable were the large optional “Sombrero” wheel covers. Hydra-Lectric window lifts became standard equipment in the 1947 Series 75 Fleetwoods and Series 62 Convertible, which was the only soft-top. Convertible production of 6,755 cars in 1947 helped Cadillac’s total sales of 61,926 surpass Packard as the best-selling American luxury car.
After being the subject of a body-off restoration for a previous owner, this Series 62 Convertible Coupe was entrusted by the current owner to David Prueitt at the respected Prueitt Automotive Restoration shop in Glen Rock, Pennsylvania. Prueitt gave the car a careful and fine detailing and delivered it to Hershey in October 2014, where it was awarded First Junior honors at the Antique Automobile Club of America Eastern Division Fall Meet. It is painted in Belden Blue, and the interior is done in correct blue leather and grey Bedford cord. The car has a tan canvas power top, as well as such equipment as a Hydra-Matic transmission, power windows, an original radio, a heater, windshield washers, a backup light, dual exterior mirrors, and rear fenders skirts. Also included with the car are two top boots with matching bags, one in blue canvas that matches the body and another in tan, to match the convertible top.
The current mileage shows barely 55,800, which is understood to be original. Series 62 Cadillacs from 1940 to 1948 are recognized as Full Classics by the Classic Car Club of America, and their excellent performance at highway speeds makes them popular tour cars for CCCA CARavans. This car is certainly one of the nicest examples in existence today.
More Info Here:
Robert Myrick Photography© 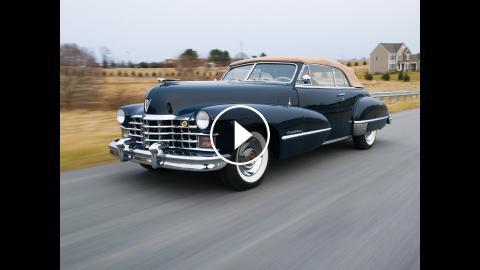