Added 2 weeks ago by admin
14 Views
1959 BMW Isetta 300
Sold For $55,000 Including Commission
RM | Sotheby's - AMELIA ISLAND, Florida 2015
Chassis No. 514691
Engine No. 511156
Beautiful example of the legendary microcar that saved BMW
Fitted with the highly desirable and optional retractable sunroof
Includes a custom-designed trailer that was built specifically for this car
13 bhp, 297 cc L-head single-cylinder engine, four-speed manual transmission, coil-spring independent front suspension, trailing arm leaf-spring rear suspension, and four-wheel hydraulic drum brakes. Wheelbase: 59.1 in.
The Isetta was a vehicle born of necessity, and it is often regarded as the car that saved BMW. Faced with declining motorcycle sales, the burgeoning middle class in its home market, and the political events of the 1950s leading to oil shortages in Europe, the microcar craze was ripe for success, and it was a car that BMW desperately needed. As the motorcycle market declined, BMW began moving toward high-volume car production.
For the second time in its history, BMW built a vehicle under license as a means of getting into production quickly. The two-seat vehicle with a unique front opening door became known as das rollende Ei, the rolling egg in German. BMW approached the owner of Italian company Iso and its designer/owner Count Renzo Rivolta with the idea of purchasing the rights to build the car. Rivolta sold not only the production rights to the Iso but much of the body tooling as well.
BMW debuted the Isetta at the 1955 Frankfurt Auto Show and fitted it with its own 12-horsepower, 247-cubic centimeter four-stroke engine, later upsizing it to 297 cubic centimeters with 13 horsepower, as this model has. A clutch-operated, four-speed motorcycle gearbox drove the twin rear wheels, which were placed just 20.5 inches apart. The tubular chassis provided for a light body, which weighed in at just 700 pounds. In combination with the motorcycle engine, it offered miserly fuel consumption and a mere DM 2,580 purchase price, which was just 500 more than the R25 motorcycle with which it shared its engine. Between 1955 and 1962, BMW produced 161,728 Isetta 250s and 300s, including 17,536 in the 1959 model year. The little BMW offers genuine 50-mph performance, while also delivering up to a claimed 70 mpg.
This 1959 Isetta 300 is a Euro-specification model that was sold new in Acapulco, Mexico. Euro-spec models were not available in the U.S. market but are still recognized for their body-side marker lamps and taillights that were integrated into the rear quarter panels. It is finished in Rosso Valentino and Grigio, with a matching interior, and it is equipped with the highly desirable retractable sunroof, a Euro-style folding rear luggage carrier, protective mud flaps, and a sun guard.
It was completely restored less than three years ago by well-known San Diego, California, area Isetta specialist Greg Hahs, who is also known as “The Isetta Dude.” Since its restoration, the car has been driven less than 25 miles, and according to the consigner, it is fully sorted. In addition, it comes complete with a custom-built trailer that has been designed and built specifically for hauling this car.
More Info Here:
Robert Myrick Photography© 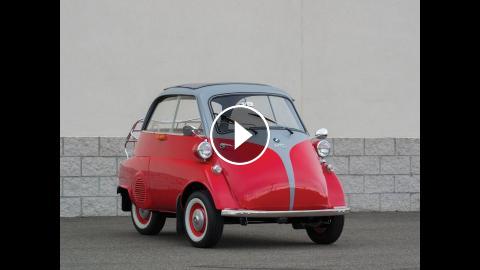