ava
Some of our favorite monologue moments from the first week of 2021, including new recordings from Trump's call with the Georgia Secretary of State, a Danish cartoon that's outraging some parents, and a "Stop the Steal" TikTok dance that's sure to take off. 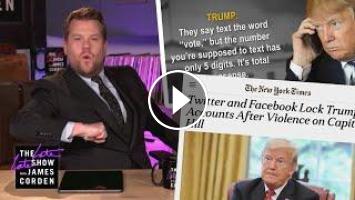 Some of our favorite monologue moments from the first week of 2021, including new recordings from Trump's call with the Georgia Secretary of State, a ...