admin
Our recent week in New York City was an action-packed one. We decided to set ourselves a challenge to see and do as much as we possibly could, and that gave way to this travel video guide which highlights 50 of the top attractions. In a city like New York this means we barely scratched the surface, but hopefully this video will highlight the cornucopia of possibilities that is the Big Apple.

We try our best to cover all of the top attractions including fine arts, entertainment, festivals, dining, architecture and museums as well as focusing on lesser known off the beaten path attractions to cover all forms of tourism. If you only have time to visit only one city in the United States it ought to be NYC, USA:

Most journeys begin at Penn Station or Grand Central, and if you arrive at the later you'll be wowed by the building. The Meatpacking District was once home to markets, slaughterhouses, and packaging plants, but times have changed. Today you'll find a mixture of trendy restaurants, clubs and boutiques. The Village used to be a bohemian neighborhood that drew artists and musicians, but today you're more likely to find upper middle class families living here. Completed in 1883, Brooklyn Bridge is one of the oldest suspension bridges in the United States. Williamsburg has become popular given its lower rent prices. University students and young professionals have been flocking to this part of town.
You can walk along the riverfront for a great view of the Brooklyn and Manhattan Bridges and the Manhattan skyline. During the summer months, Bryant Park also becomes a popular hangout spot people looking to relax and even work on their tans. The Staten Island Ferry is free of charge and this makes it really popular with visitors who want to catch a glimpse of the Statue of Liberty from a distance. Battery Park is located on the southern tip of Manhattan. Having both lived in South Korea, we were thrilled to come across Manhattan's own Little Korea. Coney Island is all about good old fashioned fun. You can ride roller coasters, stroll down the boardwalk, enjoy some beach time, and then head over the Nathan's Famous hot dogs. The Cloisters will make you feel like you've travelled over to Europe. Central Park is massive and there are so many places to visit within its boundaries. We managed to visit Belvedere Castle, the Great Lawn, Shakespeare Garden, The Ramble, The Jackie Onassis Reservoir, the Alice in Wonderland Statue, and we still left feeling like we barely scratched the surface. Strawberry Fields is a section of Central Park dedicated to the memory of John Lennon.

And that concludes a look at our very busy week in New York City. I'm still shocked we managed to cover so many attractions, but the great thing about this city is that distances aren't very long and there's always something really cool worth checking out around each corner. Have you been to New York? What are your favorite things about this city? Feel free to share your thoughts in the comments section below.

This is part of our Travel in the United State of America series. We're making a series of videos showcasing American culture, American arts, American foods, American cuisine, American religion and American people. 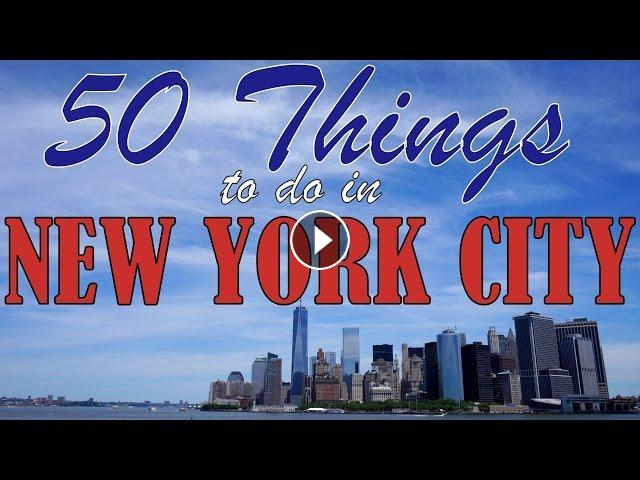 Our recent week in New York City was an action-packed one. We decided to set ourselves a challenge to see and do as much as we possibly could, and tha...