admin
You're going to love this authentic Thai iced tea recipe (cha yen ชาเย็น), it's easy to make and always refreshing. Get the full recipe here:

Thailand has some very famous drinks, including Red Bull and Singha, but there's nothing more famous throughout the world than Thai iced tea, which is known in Thai better as cha yen (ชาเย็น). The tea is served at Thai restaurants around the world, and many people, especially if they like sweet and creamy beverages, love it. Thai ice tea is often easy to recognize because of its bright orange color and creaminess.

Why wait until you go to a Thai restaurant to have ice tea? Here is an authentic Thai iced tea recipe, Bangkok street food style, that you can make at home right now. There are only a few ingredients that you need, and if you have an Asian supermarket near your home, it should be quite easy to get everything you need. One thing I just want to clarify though is the orange color of Thai iced tea. The tea brand that is commonly used in Thailand is called Cha Dra Muer (ชาตรามือ) - or it's just known as Number One Brand. It's black tea that includes a bit of C yellow number 6, which is what gives it the signature color. However, though I have not tried it, if you just use regular black tea for this Thai iced tea recipe, it should still work fine, it just won't be that orange color.

The first thing you need to do is steep your tea. There are many ways to do this, but on the streets of Thailand, most Thai iced tea vendors will make their tea using a tea sock, which is almost like a real sock connected to a wire ring. You add the tea leaves to the sock, pour hot water into a cup, and just let the leaves brew for a few minutes. Alternatively, you could just add your tea leave to a cup, pour in the hot water, let the leaves brew for a few minutes, and then strain out the leaves - whatever is easiest for you. Next step is to mix in sweetened condensed milk as well as evaporated milk, and stir it up until it's a nice creamy mixture. You can also add in some extra sugar, according to your own taste. Just to note, since you will be pouring your hot tea over ice, you can make it a little sweeter than you think, as it will become watered down from the ice.

As an extra step, but it is very fun to try, you can put the tea in one cup, and then pour it, using some elevation to another cup. This is going to create some foam on your tea, almost like froth. This is not necessary, it's just fun (see video for details).

The next step in this recipe for Thai iced tea is to take a glass, fill it up to the top with crushed ice, and then pour your milky tea mixture over the ice. Give it a quick stir, and then finish it off with another sprinkle of evaporated milk to give it a nice creamy top. Drink you Thai iced tea with a straw, and if it's a hot day, you'll surely be satisfied and refreshed. Enjoy.

Music in this video courtesy of Audio Network

Thank you for watching, and don't forget to subscribe: 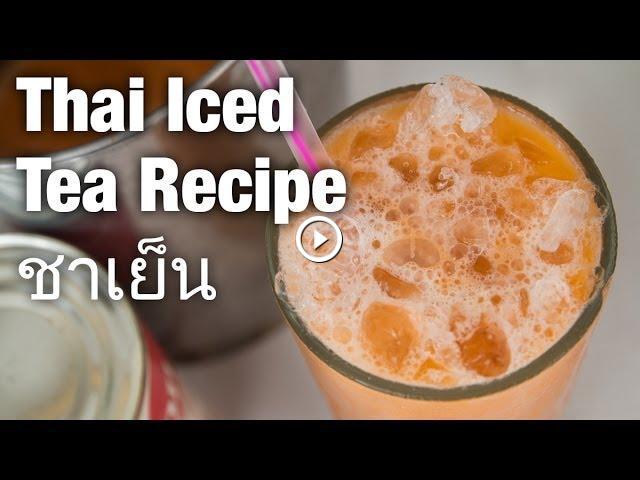 You're going to love this authentic Thai iced tea recipe (cha yen ชาเย็น), it's easy to make and always refreshing. Get the full recipe here: Thailand...