admin
Breast Milk Bodybuilder: My Husband Drinks Women's Milk
Subscribe:
A FITNESS fanatic drinks human BREAST MILK in a bid to get a buff bod. Danny Davidson, a 32-year-old personal trainer from Essex, drinks 100ml of the thick liquid several times a week to compliment his training regime. He believes breast is best when it comes to building muscle as the milk contains growth hormones to accelerate his bulk. The personal trainer risks infection from hepatitis and HIV at every sip as he buys his milk from strangers around the world on a website dedicated to the unusual fad. While his wife Debbie is happy for her husband of three years to spend £20 to £40 a week on the gloopy liquid, she is worried about the dangers he faces. But for Danny the risks associated with his tipple of choice are worth taking as he has soared in size.
Videographer / Director: John Robertson, Jack Stevens
Producer: Rebecca Lewis, Chloe Browne
Editor: Sonia Estal
For more compelling footage of the amazing side of life:
FACEBOOK: Like Barcroft TV -
TWITTER: Follow @Barcroft_TV -
WEBSITE: For licensing & business enquiries,
visit the Barcroft TV site - 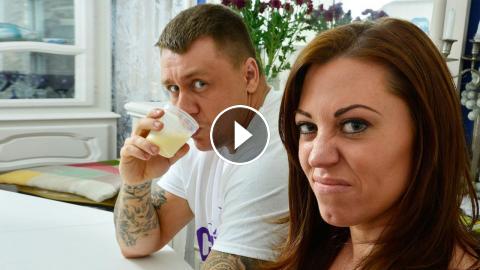