Camila Cabello vs Becky G: Who Rocked the Carpet at the Billboard Latin Awards?

admin
JLo's Billboard Latin Fashion ►►
More Celebrity News ►►
Latin’s biggest stars came out last night for the 2015 Billboard Latin Music Awards. Camila Cabello and Becky G were two ladies who turned it out for the red carpet and we are breaking down their looks!
Welcome to Clevver’ s Trophy Life where we bring you the all of the breaking news all award show season.
Rebbeca Marie Gomez, better known by her stage name Becky G has been making headlines for the past few days after her and her boyfriend Austin Mahone confirmed their relationship. However, it looks like Becky wanted to draw attention elsewhere after she showed up on the red carpet looking like a mini J.Lo. The 18 year old rapper/singer wore a rose gold Cherbel Zoe dress with gladiator heels. The mini was semi sheer and showed off her legs. And of course, as a face of covergirl, she was rocking a pink lip using Cover Girls “lava luster”.
But not to be outdone by Austin Mahone’s ex girlfriend, Camila Cabello also looked glamorous on the carpet last night. She went for a little bit more of a dramatic look wearing a floor length black gown. The mermaid train balanced out the cut out around her stomach and the sheer sleeves added a bit of sex appeal. The 18 year olds hair was swept in a side part and she rocked a ros3e lip with a bit of a cat eye. We have to mention that she was in harmony (get it) with her other band members, who all rocked black or red dresses.
Now, we know it’s hard to decide because both girls brought the heat but who rocked your favorite look? Let me know in the comment section below, hit me up @daniellerobay on Instagram, don’t forget to subscribe, and then click right here to check out Jlo’s Latin Billboard Awards Fashion. Thanks for watching, I’m your host Danielle Robay and I’ll see you next time.
For More Clevver Visit:
Website:
Like us on Facebook:
Follow us on Twitter:
Keep up with us on Instagram:
Add us to your circles on Google+:
Tweet Me:

Camila Cabello vs Becky G: Who Rocked the Carpet at the Billboard Latin Awards? 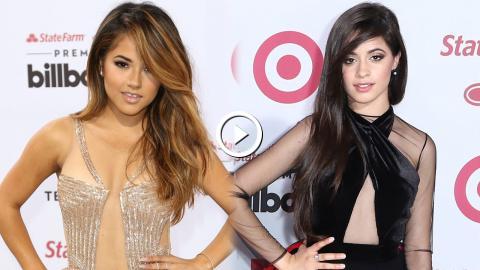