admin
Carnival Cruise Ship Paradise In Caribbean Sea
Lido Deck Swimming Pool And Slide
MS Carnival Paradise is the eighth and last vessel in Carnival Cruise Lines' Fantasy-class cruise ships. She was built in 1998 by Kvaerner Masa-Yards Helsinki New Shipyard, Finland, as the MS Paradise. From September 2004 to December 2011, she sailed out of Long Beach, California, doing three and four day Baja Mexico cruises that visited Catalina Island and Ensenada. Currently, she sails from Tampa, Florida, offering four and five night cruises to the Western Caribbean, visiting Grand Cayman and Cozumel replacing the Carnival Inspiration.
The Paradise was built to be the world's first completely non-smoking cruise ship and she was entered into service supported by several anti-smoking and cancer-prevention groups. "No smoking" signs were placed prominently on both sides of the ship and on the stern under the name.
Non-smoking rules were strictly enforced. No smoking materials of any kind were permitted aboard. If anything was seen or found, the passenger was fined $250 and put off at the next port (transportation home to be provided at passenger's own expense). Due to poor revenue, Carnival decided to discontinue the smoke-free ship in December 2003 because non-smokers tend to not drink or gamble as much as those accustomed to smoke.[4]
Scheduled to arrive in the Port of Long Beach, California, on September 20, 2004, her arrival was delayed due to several major hurricanes (see 2004 Atlantic hurricane season). Her cruise through the Caribbean and Panama Canal, and up the Mexican coast was further hindered by more hurricanes. After having skirted the bad weather with minimal inconvenience, Paradise arrived in Los Angeles in the early morning, docking at the Long Beach terminal of Carnival Cruise Lines, which was the building that had housed the Spruce Goose. Later that day, the nonsmoking signs were painted over. She still boasts one of the strictest smoking policies in the fleet.
After her arrival in Long Beach, she became popular among younger cruisers looking for a more casual and affordable alternative to the longer more structured lines, with her 3 day and 4 day cruises to Ensenada, Mexico and Santa Catalina Island, California.
Carnival Cruise Lines retrofitted the Paradise with the first “earth-friendly” dry-cleaning system, which uses environmentally safe detergents and reduces hazardous chemical runoff. In addition, Carnival has also been at the forefront of engine design, and their new class of ships features a “highly efficient” diesel-electric propulsion system known as the “enviro-engine”, which nearly eliminates visible smokestack emissions.[citation needed]
In late 2011, Carnival moved the Carnival Paradise to Tampa, replacing the Carnival Inspiration, which went to California. Currently, the Carnival Paradise takes 4 and 5 night voyages to Grand Cayman and Cozumel, Mexico.
With the Paradise not getting the "Evolutions of Fun" upgrades, she will be receiving the "Fun Ship 2.0" upgrades in 2015, her sister the Carnival Elation will receive the same upgrades in 2014.
More Info Here:
Robert Myrick Photography
GoPro Hero 3 Black Edition 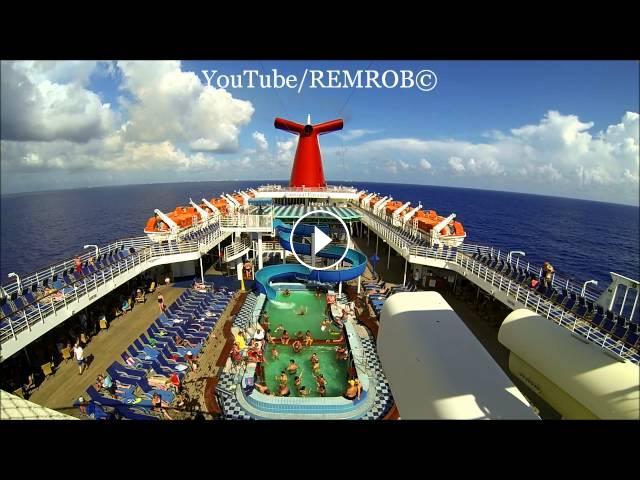