admin
More Celebrity News ►►
Chloe Grace Moretz has responded the backlash from her Snow White movie poster.
And guess what? She totally agrees with you.
Yesterday the Internet took aim at Chloe Grace Moretz’s new Red Shoes and the 7 Dwarfs animated film- a spoof on the classic Snow White. The film was DRAGGED on Twitter because of a poster that included an obvious body shaming theme.
Model and body-positive-advocate Tess Holiday summed up the Internet’s sentiments on the poster. Tess posted a photo of the movie’s poster which features a tall, skinny Snow White next to a shorter, plain-faced version with the words “What if Snow White was no longer beautiful and the 7 Dwarfs not so short?” Tess captioned her tweet, “How did this get approved by an entire marketing team? Why is it okay to tell young kids being fat = ugly? @ChloeGMoretz”.
Chloe who voices Snow White, has now responded to the critics and Tess via Twitter. And it turns out the actress is just as shocked by the poster as you are. Chloe tweeted, “I have now fully reviewed the mkting for Red Shoes, I am just as appalled and angry as everyone else, this wasn't approved by me or my team”. Chloe followed that up with, “Pls know I have let the producers of the film know. I lent my voice to a beautiful script that I hope you will all see in its entirety”.
But Chloe wasn’t done there, the actress went on to explain WHY you should see the movie and offered her apology tweeting, “The actual story is powerful for young women and resonated with me. I am sorry for the offense that was beyond my creative control”.
The poster has since been pulled from the media as well as the trailer that was released online. One of the film’s producers, Sujin Hwang, told Entertainment Weekly that the marketing campaign has been terminated and the animation studio Locus wishes to apologize. The producer said in a statement QUOTE, “Our film, a family comedy, carries a message designed to challenge social prejudices related to standards of physical beauty in society by emphasizing the importance of inner beauty. We appreciate and are grateful for the constructive criticism of those who brought this to our attention. We sincerely regret any embarrassment or dissatisfaction this mistaken advertising has caused…”
What do you think of Chloe’s response to the marketing campaign? And will YOU still go see Red Shoes when it hits theaters? Tell us all those thoughts down below in the comments. And if you want more where that came from, check out Selena Gomez explaining what her song “Bad Liar” is really about. As always I’m your host Miriam Isa, I’ll see you guys next time.
For More Clevver Visit:
There are 2 types of people: those who follow us on Facebook and those who are missing out
Keep up with us on Instagram:
Follow us on Twitter:
Website:
Add us to your circles on Google+:
Tweet Me: 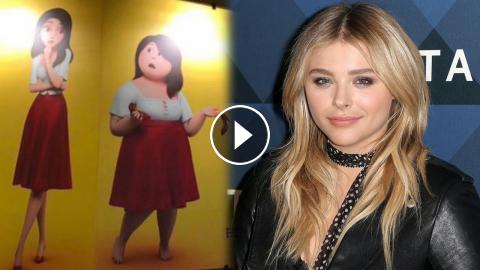 More Celebrity News ►► Chloe Grace Moretz has responded the backlash from her Snow White movie poster.And guess what? She totally agrees with you.Yest...