admin
Considering we had just braved ice canoeing on the mighty St. Lawrence River, dog sledding for the first time at Quebec City Winter Carnival was a cinch. With the heavy guy on the seat of the sled and Audrey taking command at the back, we were off to races as we zoomed over ice and snow. From a distance, it doesn't appear that the dogs are running too fast; however, once you're on the sleigh yourself it is a whole other story. The speed and stamina of the dogs was particularly impressive. At one point they stopped for no apparent reason and the other dog sleigh passed us. The most challenging aspect was trying not to tip over during tight corners; luckily for us, we managed to complete the circuit without wiping out ;) Before we knew it we had completed our first dog sled adventure. I'd definitely be up for trying it again - especially in a more open space next time.
DOG SLEDDING at Quebec City Winter Carnival Travel Video Transcript:
Alright, so what are we doing next? We're going to be doing something I've wanted to do for years. We're going dog sledding! Woo!
That's awesome.
Go, puppies, go!
Pull.
Steer it.
Go, puppies!
Good puppies.
Oh uh. Oh, shoot.
Hey pups.
Come on.
They passed us.
Come on puppies.
Let's go puppies. I'm too fat.
I'm too fat.
I'm too fat, they can't pull us up the hill.
Come on. Come on, puppies. There we go.
Come on puppies.
Stop, stop.
This is part of our Travel in Canada series. We're making a series of videos showcasing Canadian culture, Canadian arts, Canadian foods, Canadian religion, Canadian cuisine and Canadian people.
Proudly presented by: &
All photos and video taken by Samuel Jeffery (Nomadic Samuel) and Audrey Bergner (That Backpacker).
Music in this video courtesy of Audio Network 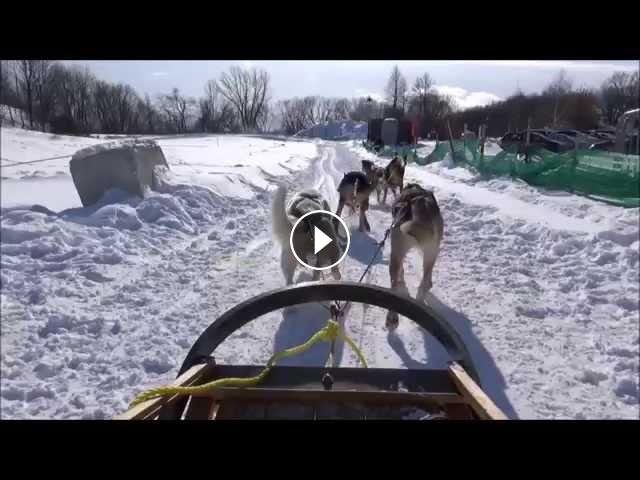 Considering we had just braved ice canoeing on the mighty St. Lawrence River, dog sledding for the first time at Quebec City Winter Carnival was a cin...