Donald Trump Wants SNL Cancelled After Getting Offended By THIS Skit

admin
More Celebrity News ►►
Trump may have just gotten a taste of his own medicine, and boy does it BURN.
Never having been a show for passing up a good roast, the comedic cast of Saturday Night Live took on a hilarious reenactment of the second Presidential Election between Hillary Clinton and Donald Trump, so before we get any further, just one more thing…
OK, so now that we got that over with, last night’s skit featured Alec Baldwin, who took on Trump while Kate McKinnon played Hillary. The two actors went head-to-head making jabs at each candidate, especially focusing on the take-down of Trump. The first audience question focused around whether or not the candidates are good models for children, when Trump responded that QUOTE, “I love children so much, I would marry them. I even helped a kid named Kevin McAllister find the hotel lobby in Home Alone 2.”
The moderators portraying Anderson Cooper and Martha Raddatz then grilled Trump on the infamous audio tape scandal between Trump and Billy Bush exchanging in ‘locker room talk’, and Alec’s portrayal of Trump’s response was so spot on, it may be eligible for an Oscar.
And after Martha then asked Trump about all the women who’ve recently come forward accusing Trump of sexual assault, he decides to take the high road… as per usual.
The debate went on…. and on…. and covered other controversial moments, like Trump lurking over Clinton as she was speaking, mentioning the inner cities when referring to black people and accusing Hillary of committing crime after crime. But things took a lighter turn when the one and only Ken Bone made his debut…
But shockingly enough, NONE of this amused the real Trump in the slightest. He took to Twitter to share his disapproval of Alec’s portrayal of him, writing QUOTE, “Watched Saturday Night Live hit job on me. Time to retire the boring and unfunny show. Alec Baldwin portrayal stinks. Media rigging election!”
He followed up his tweet about wanting to cancel SNL with a series of other tweets, writing QUOTE, “Polls close, but can you believe I lost large numbers of women voters based on made up events THAT NEVER HAPPENED. Media rigging election!”
This isn’t the first time Trump has made an appearance on the comedy show… last November, SNL jabbed at Trump’s supporters, calling them racist multiple times throughout the sketch which he seemingly got a kick out of… but this time it was clearly America who found comedic relief in the most recent SNL skit, and this will definitely call for a very interesting third debate come Wednesday.
But whatever your opinion about the two candidates may be, I want to hear your thoughts on Saturday’s sketch right down here in the comments. After that, you can click right over here to check out a Halloween sliced-smile tutorial on Beauty Break. Thanks for hanging out with me here on Clevver News, I’m Erin Robinson and I’ll see you next time.
For More Clevver Visit:
Website:
Like us on Facebook:
Follow us on Twitter:
Keep up with us on Instagram:
Add us to your circles on Google+:
Tweet Me:

Donald Trump Wants SNL Cancelled After Getting Offended By THIS Skit 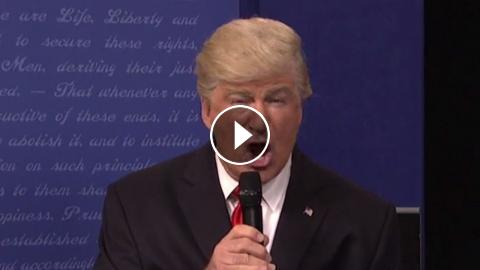 More Celebrity News ►► Trump may have just gotten a taste of his own medicine, and boy does it BURN. Never having been a show for passing up a good ro...