ava
James Corden welcomes Dr. Michael Eric Dyson, author of "Tears We Cannot Stop: A Sermon to White America" and several other books, to discuss civil unrest in the United States following the death of George Floyd at the hand of police officers in Minneapolis. And Dr. Dyson discusses some ways white Americans can learn and engage to help those who face systemic injustice, including how we can educate our children on these issues. 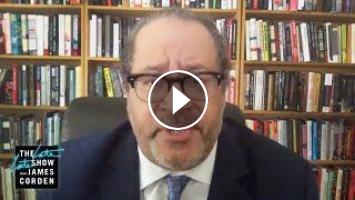