admin
Come join us on a drunken escapade as we indulge in an Argentinian wine taste test with friends (Steve & Kristin) in Buenos Aires, Argentina. We sample four different kinds of wine (Malbec, Merlot, Rosé and White) and try a traditional Argentine dessert called Postre vigilante (Queso y Dulce: cheese with fruit) in our apartment in Buenos Aires. Have you tried drinking Argentinian wine? Which bottle was your favorite?
Check out Part 1 (Eating Steak on Steve's Channel):
Follow Steve & Kristin:
Steve: (YouTube)
(Travel Blog)
Kristin: (Travel Blog)
(YouTube)
Drinking Argentinian Wine with Friends in Buenos Aires Travel Video Transcript:
Wine tasting!
So it is our last night in Buenos Aires and we are hanging out with two of our friends Kristin and Steve. And we actually just finished filming a video of our dinner. We had some steak with Steve, so you can see that video on his channel.
He's already had a few drinks in case you can't tell. But we figured let's take the after party over to our apartment. So we've bought some local Argentine wine.
And now it is dessert time and wine.
We needed something a little bit sweet to go along with the wine. So this is our dessert today. We are having Queso y Dulce. So that is basically cheese with three different types of sweets. Is he drinking behind the scenes? Hahahaha.
Anyways, let's have a quick look here. So we are having membrillo which is quince, batata which is sweet potato and zapallo which is pumpkin. And the most important thing is this is your first time to try it.
It is now time to rate the wine.
So okay. We started with the Merlot from 2012. Which was on the shelf of the 2014. Just to point it out. So, okay here comes the Merlot. Oh, it was the bread one. I remember it is the bread wine. I have it in my nose now. Oh, it is a very nose-y wine.
So it smells like bread. It tastes like bread. It tastes a bit like bread. But um, it is not too shabby. It is a solid wine. It is not too sweet but it gets you drunk. All the wines do but this one. It is a good wine. A solid one. I would not say it is 1st place. No.
Next one is Benjamin. Rose. Rose. Benjamin. It is still like drinking canned peaches. Canned peaches. The sugary one. It gets the job done but maybe I'll have a horrendous hangover tomorrow. We're not supposed to think about that right now, right?
From like four. The white wine we are saving that for later. We're just going to say that was an average one. And we're moving on to this one. The Cafayate Malbec. And this is the one, we actually tried this at your place yesterday, so we knew it was a good wine. And ding ding ding we have a winner. This is the good wine. We have a winner. All of us think, including even Audrey right, this is the best. Even Audrey who doesn't like wine that much thinks this one is good. I think Cafayate is a good wine. Cafayate is a cool place. We've all traveled there. It is like awesome. So this is the wine, and you know what it is not even that expensive, you can pick one up for about 40 or 50 Pesos. Not too bad. Cheers to that guys. Salud!
So we did this whole trip like two months in Patagonia so we were going down from Buenos Aires, where we are right now, flying into Bariloche crossing into Chile going down the Carretera Austral, doing some crazy adventures there, going back into Argentina to El Chalten to do hikes there and then Torres del Paine to finish this whole thing up. And this is actually the thing we did. The whole video series about adventures in Patagonia which is about to come out on my channel soon. And what is the name of your channel. BackPacker Steve. Yes. Backpacker Steve. The footage is amazing. Like it is incredible. Drone footage, high quality and us. And the two of you. That is a winning combo.
Guys I write a travel blog Be My Travel Muse dot com which is geared towards solo travelers in general but especially adventurous women or want to be adventurous women who want to try something new and challenge themselves. I've written a book about how you can travel on your own and I also have a budding YouTube channel so check out Be My Travel Muse and subscribe. Bye!
Bedtime. Ciao Argentina! The wine is so good. And now we're going to go catch a flight tomorrow. And we're out of here. That's it.
This is part of our Travel in Argentina series. We're making a series of videos showcasing Argentine culture, Argentine cuisine, Argentine food, Argentinian food & Argentinian cuisine.
Proudly presented by: &
All photos and video taken by Samuel Jeffery (Nomadic Samuel) and Audrey Bergner (That Backpacker).
Music in this video courtesy of Audio Network 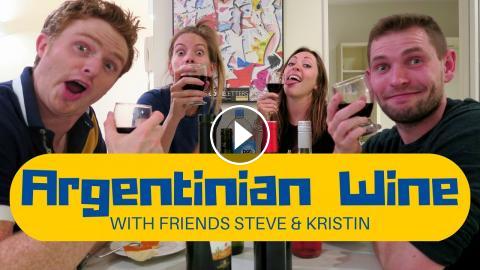 Come join us on a drunken escapade as we indulge in an Argentinian wine taste test with friends (Steve & Kristin) in Buenos Aires, Argentina. We sampl...