admin
More Celebrity News ►►
Normani, Dinah Jane, Lauren, and Ally all enjoyed their Fourth of July. But via snapchat and twitter posts we couldn’t help but notice Camila was MIA. Was she sick? Is there some drams? All we have to go off of is a snapchat photo from Camila in the bathroom with the caption, “ my lil studio I’ve been stuck in all day.” Perhaps she was recording or working on a project.. but regardless spending the day in the bathroom sounds pretty crappy…
Mean while the other four were getting down and jiggy wit it with their makeup artist and Lauren’s dad. So adorable.
Meanwhile the girls are banning together to defend one of their security guards who was accused of inappropriately touching one of their fans. They released a statement saying quote, “"Our security team is set up and in place to protect us and our privacy when people go beyond normal boundaries. We've seen all over Twitter outrage over one of our security guards attacking and trying to inappropriately touch one of our fans and we wanted to put out a statement calling out this lie,"
According to the girls, the accusing girl tried to come to Lauren and Dinah Jane’s room. They witnessed the girl lie to the security guards and basically saw the whole things and not once did the security guard touch her inappropriately. And with the recent events in Orlando and Christina Grimmie, of course security is going to take action on anything that looks even a little bit sketchy.
What did you guys think of Camila being MIA from the Fourth of July celebration? Drams? Sick? Or just busy? Let me know in the comment section below. And when you’re done with that click over here to check out our new show Diss Track, Bieber VS. Selena. Thanks so much for checking in with me here on Clevver News. I’m your host Meghan Lamontagne and I’ll see you next time!
For More Clevver Visit:
Website:
Like us on Facebook:
Follow us on Twitter:
Keep up with us on Instagram:
Add us to your circles on Google+:
Tweet Me: 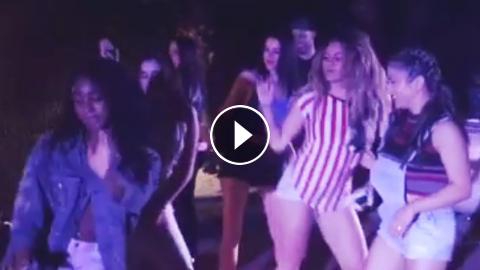 More Celebrity News ►► Normani, Dinah Jane, Lauren, and Ally all enjoyed their Fourth of July. But via snapchat and twitter posts we couldn’t help but...