admin
As a rapidly globalizing city, Kuala Lumpur has, over the past two decades or so, attracted a large influx of foreign workers from the Philippines, Indonesia, Cambodia, Bangladesh, Pakistan, Vietnam and Myanmar. According to official figures released just recently by the Ministry of Immigration, Malaysia is now home to more than 2.4 million legal foreign workers, the majority of whom are located in Kuala Lumpur. And for every legal foreign worker there is an estimated two or more illegals plying their trade here.
As a result, there is an emerging phenomenon that sees Kuala Lumpur dominated by resident foreign workers. Over the years these foreign workers have formed their own communities and have transformed the local character of Kuala Lumpur beyond recognition. Where once, the city streets and public places were recognizably Malaysian, nowadays these very same places have become large enclaves of resident foreign workers who assign their own spaces for food consumption and production, recreation, religious worship and so forth. There are even specific places to exchange currencies to send back to their homes abroad. A great many locations have their own public amenities set up to fulfill their needs in a foreign city. They even have their own newspapers and signboards erected in their native tongue.
In fact the problem has become so acute that many Malaysians will swear that they are in a foreign city whenever they visit Kuala Lumpur on a Sunday or public holiday when large numbers of foreign workers meet in public places to socialise. The dominance of these communities of foreign workers can be seen in full swing, for example, during the religious holiday of Hari Raya Haji, when the main thoroughfare Jalan Tun HS Lee and other central streets of Kuala Lumpur were closed to traffic to accommodate massive street prayers by Muslim foreign workers.
No wonder Kuala Lumpur has become what it is now: the city of foreign workers. 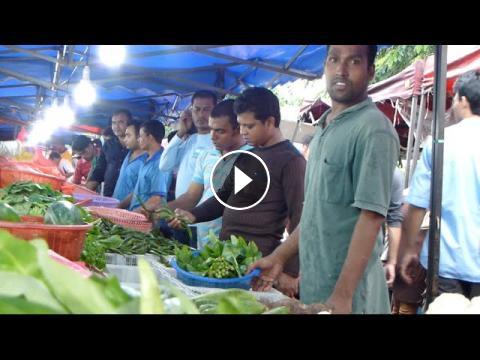 As a rapidly globalizing city, Kuala Lumpur has, over the past two decades or so, attracted a large influx of foreign workers from the Philippines, In...