HOW Tristan Thompson Kept Cheating A Secret From Khloe For Months

admin
More Celebrity News ►►
Thanks to Secret Active for sponsoring this video. Learn more:
Instagram? Really? It might be time to check your partner’s DMs.
The internet will be our downfall, yall. Between the election hacks and the shady stuff happening on Instagram’s DMs, the world is a scary place. According to US Weekly, a source has revealed to the mag that Tristan managed to cheat on Khloe repeatedly by sending low-key DMs on the Gram to QUOTE “Exotic or non-American-looking girls with big butts.” I swear that’s a direct quote. “Tristan slides into girls’ DMs. He messages girls that way, on Instagram, and then meets up with them.” Well, if all men made it that easy my first child’s last name would be DiCaprio. The insider added that Thompson is QUOTE “incredibly remorseful for everything that has happened,” and has asked Khloe to “give him another chance and to give them time as a couple and a family to bond.” Meanwhile, it seems like a former NBA player is lurking from the shadows trying to swoop in on what Tristan screwed up. Lamar Odom, according to an exclusive source at Touch Weekly, has been texting Khloe letting her know he’s here for her. QUOTE: "He just wants to be a bed of comfort to her and he’s hopeful to meet baby True soon. Like her mother, he knows that True will be absolutely gorgeous and he’d love the honor of holding her in his arms. He’s adores that name too and only wishes he could have lived up to her name when he was with Khloé." Lamar allegedly thinks this is his chance to prove to KOKO that he’s a changed man. He’s Lamar 2.0. QUOTE "He still loves her and doesn’t want her to have to be a single mother given the state of her relationship with Tristan. He really feels heartbroken for her.” “He sent True a plethora of baby clothes, pacifiers, and the best present of all — an infant Clippers and Lakers jersey with his name and old number on the back," another source told In Touch. "Lamar knows Khloé’s going through hell and would like to be there for her just like she was for him when he was knocking on death's door. He has the utmost respect, love, and admiration for Khloé and is tremendously happy she’s had her first child. Truth be told — Lamar wishes he were the father." He sent her baby gifts. Not sure how Tristan feels about that. Not sure he gets a choice in the matter. Anyway, if all this is true- what do you think? Are you rooting for Khloe and Trist or Khloe and Lamar? Or Team Khloe riding solo? Let me know below, and don’t forget to follow me on Twitter @Miriamisa and on the Gram @Miriam_isa cuz it’s 2018 and real friendships are formed on Instagram. I’m Miriam Isa, you guys rock, have an awesome week and thanks for watching Clevver.
For More Clevver Visit:
There are 2 types of people: those who follow us on Facebook and those who are missing out
Keep up with us on Instagram:
Follow us on Twitter:
Website:
Add us to your circles on Google+:
Tweet Me:
This is a sponsored video.

HOW Tristan Thompson Kept Cheating A Secret From Khloe For Months 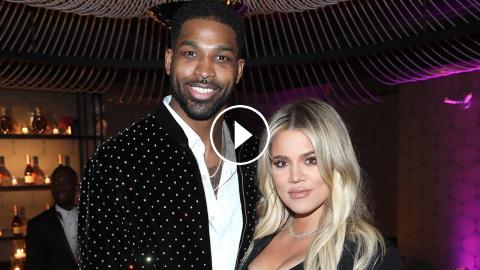 More Celebrity News ►► Thanks to Secret Active for sponsoring this video. Learn more: Instagram? Really? It might be time to check your partner’s DMs....