ava
It's night three of our London shows, and after checking in with our guests, James checks in with CBS Senior Vice President of Late Night Programming (West Coast) Nick Bernstein about what exactly he's been doing this week, which apparently isn't much. Elmo got his COVID-19 vaccine, tennis player Jodie Burrage helped a Wimbledon ball boy with the candy Percy Pigs, and James asks Reggie for a favor. 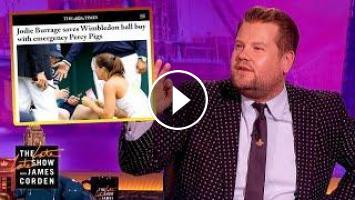 It's night three of our London shows, and after checking in with our guests, James checks in with CBS Senior Vice President of Late Night Programming ...