admin
Namdaemun Market (남대문시장) is the oldest and one of the most famous markets in Seoul, Korea to eat Korean street food. It is a bustling hive of activities where you can find cheap Korean food and also do some souvenir shopping or just buy regular everyday items such as clothes. We end up walking around the market for hours eating as much Korean street food as humanly possible and also showing you what else you can do at Namdaemun Market (남대문시장). The following is a list of all the Korean street food (한국 길거리 음식) we sampled in Seoul (서울):
마약김밥 - Baby Gimbap: Korean rice rolls with simple ingredients inside like carrots and yellow radish
호떡 - Hotteok: Korean dessert pancake with brown sugar, honey, cinnamon and pine nuts inside. One of our personal favotires!
핫도그 - Hot Dog (aka corndogs): Korean hotdogs with deep-fried batter and french fries
오뎅 - Odeng: Spongy Korean fish cakes served on a skewer
왕찐빵만두 - Wang Jjinppang Mandu: (Korean steamed buns with red bean-paste filled inside)
고구마 - Goguma: Korean sweet potato that has been steamed
GEAR WE USE
Olympus OM-D E-M5 II:
Canon G7X:
Olympus 14-150mm II Lens:
Rode Video Mic GO:
Joby Gorilla Pod:
SanDisk 16GB Extreme Pro:
SOCIAL MEDIA & TRAVEL BLOGS
AUDREY:
blog:
instagram:
facebook:
twitter:
SAMUEL:
blog:
facebook:
twitter:
instragram:
Korean Street Food in Seoul, Korea at Namdaemun Market (남대문시장) Travel Food Video Transcript:
Well good morning from Namdaemun Market (남대문시장). Today we have chosen to skip lunch and have lots of snacks at this market instead so I'm pretty excited for that.
Yeah, so Namdaemun Sijang (남대문시장) Namdaemun Market is the oldest market in Seoul (서울) and it is also one of the best places to get Korean street food (한국 길거리 음식). So we're just going to go on a rampage and eat as much Korean street food as we possibly can. A rampage! You heard it here first. Let's go eat.
So I got myself a potato corn dog. So this is a hot dog (핫도그) on a stick. It has been breaded I guess and then they've attached these french fries as well. So it is like really over the top and I'm going to add some ketchup.
So we're trying Odeng (오뎅) which is a Korean fishcake. And this is one of the most common Korean street foods (한국 길거리 음식) you can find in just about everywhere. Often places where you get tteokbokki (떡볶이). Yeah, and it is so cheap. This is usually fifty cents. Yeah, this one was more expensive because it is in Namdaemun (남대문). Yeah. It was one thousand Won (원). ₩1000 KRW.
Okay so we're here in the basement level of the Namdaemun Market (남대문시장). We found a little treasure of a restaurant here. Just a tiny little hole-in-the-wall place. We are having mayak kimbap (마약김밥). And if you've never had gimbap (김밥) before these are basically your Korean rice rolls.
So we may have come to Namdaemun (남대문) for the street food; however, this is also a great place if you're looking to get a bargain on basically anything.
Yeah, we just found this place that specializes in Mandu (만두) and different other kinds of steamed buns. And we're getting something called Wang Jjinppang (왕찐빵).
What did you get? I got myself Goguma (고구마) which is Korean sweet potato. It has been freshly steamed.
So for our final snack of the day we are having Hotteok (호떡). And I feel like we've shown this snack probably a million times on our channel but we just like it. It is our favorite Korean food.
Leaving very satisfied. That was, I mean actually I know I was going to eat a lot but I actually ended up eating a whole lot more than I originally planned. Like that was a pig out.
So if you're coming to Namdaemun Market (남대문시장) I think something that you should understand is that it is a little bit more touristy than some of the other Korean more local Korean markets.
And you can expect to pay a little bit more for some of the Korean street food. A prime example of that was when we had Odeng (오뎅). Normally I pick that up elsewhere for maybe five hundred Won (원). ₩500 KRW.
Whereas here I paid a thousand. So I paid double.
But there were some treats that I had that were exactly the same price including the Hotteok (호떡) which was a thousand here. Also a thousand in most other places.
I hope you enjoyed this Korean street food (한국 길거리 음식) video and be sure to stay tuned on our channel every Monday. We have new videos coming out from South Korea. We'll see you soon with new Korean content.
This is part of our Travel in South Korea video series showcasing Korean food, Korean culture and Korean cuisine.
Music in this video courtesy of Audio Network 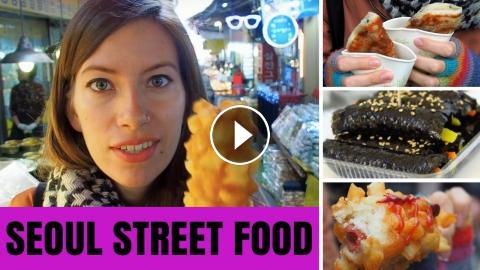 Namdaemun Market (남대문시장) is the oldest and one of the most famous markets in Seoul, Korea to eat Korean street food. It is a bustling hive of activiti...