admin
I know we're biased but we honestly believe Korean street food is the best street food in the world hands down. If you're new to Korean street snacks your best bet is to start in Seoul, South Korea.
There are many famous markets in Seoul (서울) such as Namdaemun (남대문), Myeongdong (명동) and Gwangjang (광장시장) that are massively popular with toursts; however, if you're looking for a more local experience check out a place like Mangwon Market (망원시장) which is not far from Hapjeong (합정) and Hongdae (홍대).
In our Korean street food review we taste test some of the most popular street food snacks in South Korea such as tteokbokki (떡볶이), hotteok (호떡), tteokkochi (떡꼬치), tteok (떡) and many more. Do you have a favorite Korean street food? Let us know in the comments below :)
GEAR WE USE
Olympus OM-D E-M5 II:
Canon G7X:
Olympus 14-150mm II Lens:
Rode Video Mic GO:
Joby Gorilla Pod:
SanDisk 16GB Extreme Pro:
SOCIAL MEDIA & TRAVEL BLOGS
AUDREY:
blog:
instagram:
facebook:
twitter:
SAMUEL:
blog:
facebook:
twitter:
instragram:
Korean Street Food Taste Test in Seoul, Korea Travel Food Video Transcript:
Well good afternoon. I have just woken up from my afternoon nap and I decided hey street food would be pretty nice. So we decided to check out a local market. Korean street food is a good idea anytime of day as far as I'm concerned. Yeah, so we're at the Mangwon Market (망원시장). This is a really cool market here in Seoul (서울). It is not one of those popular touristy markets. It is very much a local market. It is nearby Hapjeong (합정) and also Hongdae (홍대) area. So we're just going to check it out. We're going to show you guys what you can find here as well as sample a whole bunch of different Korean street food (한국 길거리 음식) here in Seoul. Let's do it. Exciting times. Let's start eating.
Mandu (만두). yachae (야채).
Okay, so do you want to tell us what you ordered?
Yeah, absolutely. We're having Tteokbokki (떡볶이) which is basically my all-time favorite Korean street food snack. So let's take a look down here. I'll give you a tour. And the tteokbokki (떡볶이) part here is basically the Korean rice cakes in a gochujang sauce (고추장). A spicy red pepper sauce and then you also have fishcakes and then over here I ordered something called twigim (튀김) which is basically the fried battered objects that come along with it. Objects? Mostly vegetables. So I have like mandu (만두). Okay dumpling. This one if called yachae (야채) which is different vegetables and then over here we also have. I think there is sweet potato somewhere in there. Yes, sweet potato which is kokuma (고구마). Can't wait to try all of that.
I've got another Korean street food snack here. We've got something called tteokkochi (떡꼬치).
So how this is different from tteokbokki (떡볶이) is that the sauce is completely different. This is more like a sweet and sour type of chili sauce that is on top of it.
So your'e up again. What have you got? I found my favorite all-time Korean street snack. This is called hotteok (호떡) and it kind of looks like a donut or a really fat pancake and it is usually filled with brown sugar and pine nuts and cinnamon. Yours is a special one. What is yours? This one is nokcha (녹차) so this is green tea hotteok (호떡) which I have never had before.
Have you got to the gooey part in the middle yet. Haven't got to the gooey part. I don't know if there is a gooey part. Maybe this one is just sprinkled with green tea.
It tastes like a sweet donut. So far so good. I think it may have a filling though.
Here we go. So look at that. There you have your brown caramelized sugar, some nuts, a little bit of green tea loose leaf, cinnamon. It smells amazing. And you call it smells like Christmas, right?
This is definitely my favorite Korean street food dessert snack.
So how did you enjoy this market? It was awesome. I really appreciate this market because it has such a local feel as opposed to feeling like a touristy market and that made it a lot of fun. I think it is just a cool alternative to some of the more popular markets in Seoul. And it is just one stop away from Hapjeong on the brown line so if you come here you can go to Mangwon station and go out exit two and then it is just five minute walk and you're here. Yeah. You turn left at the exit and then left again at the next major intersection. Yeah, so it is not far at all.
This is part of our Travel in South Korea video series showcasing Korean food, Korean culture and Korean cuisine.
Music in this video courtesy of Audio Network 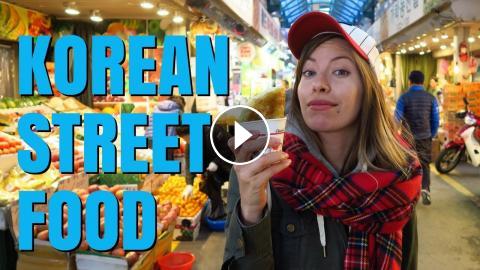