admin
Come join us for a Korean Supermarket tour in Seoul, Korea where we go grocery shopping to show you some of the unique Korean food items you can buy inside of a typical Korean department store (along with the prices of the Korean food items) at a Lotte Mart (롯데마트 서울역점) just outside of Seoul station. Grocery shopping in Seoul at one of the three big department store supermarket chains (Lotte Mart (롯데마트), E-Mart (이마트) and Homeplus (홈플러스) is an experience in and of itself as these massive stores have just about everything you can and can't imagine and we break down the cost of most Korean food items for sale.
Some unique Korean foods you'll find in Korean supermarket (슈퍼) include as follows: (prices of the Korean groceries indicated when mentioned in the video)
Persimmon (Gam - 감)
Bananas (바나나)
Goguma (고구마)
Seaweed Dried (Gim - 김)
Korean dumplings (Mandu - 만두)
Korean beer (Maekju - 맥주)
Pumpkin (Hobak - 호박)
Sushi (Hoe - 회)
Korean Raw Fish (Chobap 초밥) = 23,000 Korean Won (원)
Tuna (Chamchi - 참치)
Spam (Spam - 스팸)
Korean Red Pepper Paste (Gochujang - 고추장) = 17,000 KRW (원)
Korean soy and red pepper paste (Ssamjang - 쌈장)
Korean Soybean (Deonjang sauce - 된장)
Korean Green tea (Nokcha - 녹차)
Korean pancake mix (Hotteok - 호떡) = W3500 KRW Won (원)
Korean spicy fermented cabbage (Kimchi - 김치)
Korean Spicy Noodles (Shin Ramen - 신라면) = W800 KRW (원)
Chocolate Biscuit (Choco Pie - 초코파이) = W3,8000 KRW (원) x 24
Western products including Hershey's chocolate sauce & nacho dip
GEAR WE USE
Olympus OM-D E-M5 II:
Canon G7X:
Olympus 14-150mm II Lens:
Rode Video Mic GO:
Joby Gorilla Pod:
SanDisk 16GB Extreme Pro:
SOCIAL MEDIA & TRAVEL BLOGS
AUDREY:
blog:
instagram:
facebook:
twitter:
SAMUEL:
blog:
facebook:
twitter:
instragram:
Korean Supermarket Tour and food prices: Grocery Shopping in Seoul, Korea at Lotte Mart Department Store plus cost of Korean food items (롯데마트 서울역점) Travel Food Video Transcript:
Well good morning. For today's video we are going to take you inside a Korean supermarket. So exciting stuff guys. Yeah, we're going to give you a complete tour of one of the most popular supermarkets (슈퍼) in all of Korea. The chain is called Lotte Mart (롯데마트) and we're visiting the one at the Seoul station (서울역) branch. And it is especially big so we're going to give you a full tour show you what you can buy inside of there.
So I know going inside a Korean supermarket (한국 슈퍼마켓) may seem like a bit of an unusual video but the reason we wanted to do this is because they carry a lot of products that you wouldn't normally find in a North American supermarket so we just want to show you guys those differences in case you're thinking of visiting or thinking of moving here. We're going to show you what you can expect to find in a Korean supermarket.
So we have come to my favorite aisle. We are in the tuna (참치) and spam (스팸) aisle. And this is super popular in Korea. I remember when I taught English here one year for Christmas I got this giant case of canned tuna and canned spam. So apparently it makes for a pretty cool gift.
So there is also an entire aisle dedicated to kimchi (김치). An entire aisle section just for Korean fermented cabbage. Kimchi (김치) products.
And out of all noodle cups you can get Shin Ramyun (신라면) is probably my favorite and that is right here. Yeah. Eight hundred Won (원) for a giant bowl there.
We are now in the frozen aisle. Yeah, and what you can get at the frozen aisle are Korean mandu (만두) so that is Korean style dumplings. I'll open that up in here. Here is an example of a value pack. You can get three of them in one. Pretty cool. And they come with different fillings. You can get kimchi (김치), you can get gogi (고기) ones which are meat and you can get a whole bunch of different flavors too.
So that concludes the shopping excursion. Yeah, we gave you guys a pretty good of the food section. Now there is especially in that department store there is actually a lot more you can buy. There is clothes. The entire second floor. There is a whole second level that we didn't even go to. There is electronics and things like that. We just showed you guys the food and this is one of the big three grocery department stores you can find in Seoul, Korea.
So there is this one Lotte Mart (롯데마트). There is also E-Mart (이마트) and there is also Homeplus (홈플러스).
This is part of our Travel in South Korea video series showcasing Korean food, Korean culture and Korean cuisine.
Music in this video courtesy of Audio Network 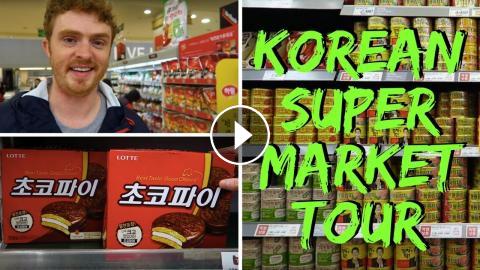 Come join us for a Korean Supermarket tour in Seoul, Korea where we go grocery shopping to show you some of the unique Korean food items you can buy i...