ava
James welcomes Little Sims to the Stage 56 bar for a chat before her performance of "I Love You I Hate You" and the two talk about her new album and recording it at the legendary Abbey Road Studios, and Little Simz admits she had to step outside to write to escape the weight of the studio. After, James asks about collaborating with Emma Corrin after watching her in "The Crown." And the two talk about her upcoming shows in London and what it's like to play in front of her friends, family and neighbors. 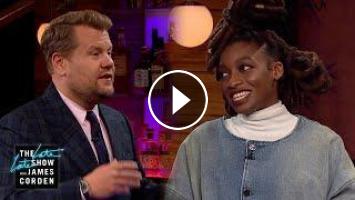 James welcomes Little Sims to the Stage 56 bar for a chat before her performance of "I Love You I Hate You" and the two talk about her new a...