ava
James swings into this Thursday night with the weekend already on his mind, but all the band can think about is the frigid air in the Stage 56 studio. How is Steve Scalfati going to play the keyboard wearing mittens? Ian Karmel is heading to his hometown of Portland, OR to perform a stand-up show this weekend so James calculates how much money he can hope to rake in. After a fresh and smooth news jingle, James jumps into the news. Celebrations are in order as President Biden’s granddaughter is getting married at The White House and his 80th birthday is coming up, making him the oldest President to hold the office. California has the honor of being home to 8 of the 10 cities with the worst drivers in America, with Los Angeles coming in 4th. A KFC in South Korea has released a mint-chocolate flavored dipping sauce, and a team of robotic engineers have invented ‘moonwalkers’, a shoe/car hybrid that will break both barriers and bones. 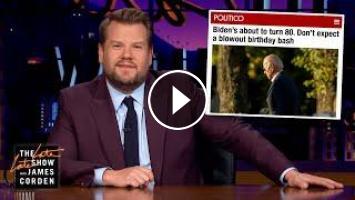 James swings into this Thursday night with the weekend already on his mind, but all the band can think about is the frigid air in the Stage 56 studio....