ava
James Corden welcomes comedian and "Chopped 420" host Ron Funches to Stage 56. James asks Ron about the benefits of getting married during the pandemic and how they plan to celebrate his son's 18th birthday. And Ron explains to James why Outkast is indeed better than The Beatles. 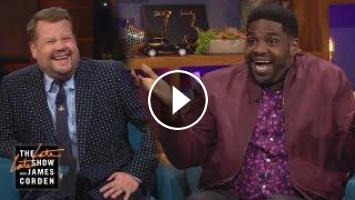 James Corden welcomes comedian and "Chopped 420" host Ron Funches to Stage 56. James asks Ron about the benefits of getting married during t...