ava
James Corden connects with Sam Fischer safe in quarantine, and asks him about the transition from writing hits for others to writing them for himself. After Sam tells James how he made a small mistake with his wedding ring right after the wedding, Sam performs his hit song "This City." 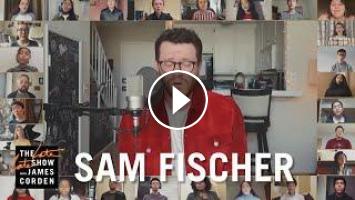 James Corden connects with Sam Fischer safe in quarantine, and asks him about the transition from writing hits for others to writing them for himself....