Somewhere In Here Is Our Monologue

ava
In this 19-minute monologue, we go on a journey exploring which movie star has the most pedestrian name, helping James figure out how to actually be friends with Chris Pratt, wishing our cameraman Joel a happy birthday and meeting Guillermo's backup drummer in case his wife goes into labor during the show. And eventually we cover some headlines, which leads to James learning about what a homecoming dance.

Somewhere In Here Is Our Monologue 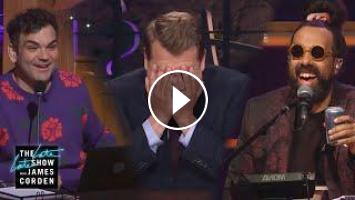 In this 19-minute monologue, we go on a journey exploring which movie star has the most pedestrian name, helping James figure out how to actually be f...