admin
Sia 2015 Grammys Performance►►
More Celebrity News ►►
Taylor Swift had a big night at the Grammy’s, but instead of tacking on more Grammys to her trophy shelf, she tacked on a few new friendships… and they maaaay surprise you!
Happy Monday you guys, and thanks for tuning into Clevver’s Trophy Life, where we’re bringing you all the scoop from the biggest award shows! So it’s safe to say Taylor made headlines for shaking it off in more ways than just her infamous dance moves at this year’s show. It was kinda shocking enough to see her and Kanye West posing for pictures together, but then there was the after-party moment with Diplo…
The famous DJ posted this Instagram picture last night of the two, while Tay was casually gettin’ her drank on. He captioned the pic, "Then this happened @taylorswift vs taylor spliff #grammys2015.” And the reason this is somewhat newsworthy is because you might remember that Taylor and Diplo basically had an online feud of sorts last year, most notably when Diplo tweeted out that "Someone should make a kickstarter to get Taylor Swift a booty. " Ayyy yi yi, and then you can’t help but wonder what Katy Perry thinks about this Insta post, since you know, she and Diplo dated for a hot sec last year and there seems to still be some issues between the two female artists. So does this mean that Taylor and Diplo are AOK these days??
That’s enough drama for now… in other exciting news, not only did Taylor spend time making amends last night, she also spent a lot of time… at church! She and musician Hozier were seen chatting it up during Sam Smith’s VIP after party last night – and the chat reportedly lasted until the wee hours of the am, like 3:30 a.m.! But this isn’t the first time the two were seen together because they were recently seen at a Haim concert in LA, and before that Hozier even hung with Taylor as she baked cookies for fans during her 1989 Secret Sessions. He told Billboard magazine all about the experience, saying QUOTE “Hanging out with Taylor as she was baking cookies for her fans was as surreal and wonderful as you'd imagine. She's a very impressive human being."
Don’t worry you guys, we’re not alluding to a newfound romance, BUT we will say that she was seen kissin’ him on the cheek a few times… Personally, I think they would be cute. Just sayin.
So, we’re curious to hear what you have to say about all of Taylor’s new friendships of the evening, from Kanye to Diplo to Hozier! Tell us what you think in the comments section below, and just in case you missed the absolute best performance of the night, in my opinion, click right over here to check out Kristen Wiig own it during Sia’s performance of “Chandelier.” Thanks for checking in with Trophy Life, I’m your host, Dana Ward, and hey, I’ve got a great idea: Why don’t you hit that subscribe button so you never miss out on all our award show coverage!?
For More Clevver Visit:
Website:
Like us on Facebook:
Follow us on Twitter:
Keep up with us on Instagram:
Add us to your circles on Google+:
Tweet Me: 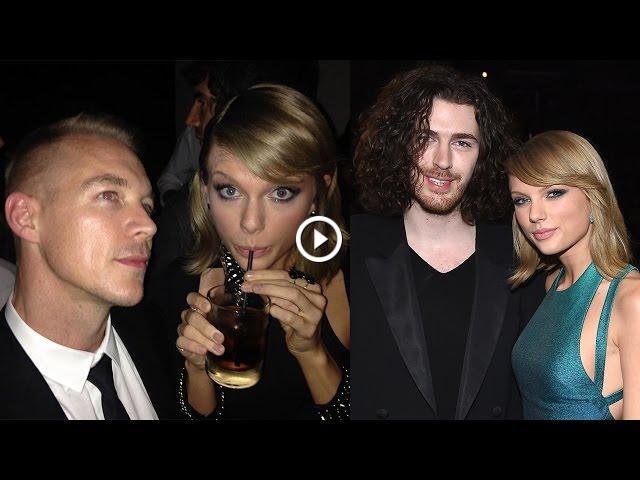 Sia 2015 Grammys Performance►► More Celebrity News ►► Taylor Swift had a big night at the Grammy’s, but instead of tacking on more Grammys to her trop...