admin
More Celebrity News ►►
Selena Gomez has been pretty busy lately - whether she’s making new music, filming videos on her iphone pro max XXL, or evading potential threats from Hailey Bieber, Selena really has a lot on her plate.
So when she makes a little pop star faux pas by crossing enemy lines, we have to cut her a little bit of slack. Right?
What’s up guys It’s Drew Dorsey here with Clevver News and let me tell you things for Selena are going from 0-100 back down to Zero, she’s in hot water with the Swifties!
During some behind the scenes promo Monday, Selena found the time to try on some brand new shapewear.
I don’t think I need to get into the whole backstory… butttt real quick... there was that time Kanye shut down Taylor’s acceptance speech at the 2009 VMAs… then they made up years later… just to have Kanye blackmail Taylor with a secret phone call recording… which then sent T-Swift into her ‘Reputation’ era!
Get it? Got it? … GOOD!
Now, not all people were at Selena’s throat… some people had theories as to why Selena seemingly betrayed her BFF Taylor.
Like, maybe Selena didn’t know that Skims was Kim Kardashian’s brand! Maybe she was just given the Skims as a gift and gave it a shout out without looking into it.
But, um, I don’t know about that one. I mean, Kim is all over the Instagram page.
And Selena, who’s been a star since her VERY early days, definitely knows better than to just advertise any old brand.
Even if Selena doesn’t know much about the Kardashians or their brands, she definitely is at least sort of hip to internet culture, even if she was staying far away from the gram and twitter… I mean Kim’s name is IN ‘SKIMS’!
When she went on the Zach Sang show the other day, she seemed to understand his early-day-Kardashian reference then.
Buuuut typically if Selena got paid to post that, she would have to disclose somewhere on the post that it was an ad.
Which she definitely did not do.
So who knows what she was thinking when she posted that photo of her supporting Skims! But you know what, I don’t think it was that big of a deal in the first place. I mean, she can be friends with Taylor while still liking a product.
Remember, more than once Kim has been found listening to Taylor Swift songs in the background of her Instagram stories.
And just the other day, Khloe posted a Taylor quote to her instagram story.
So I’m sure Taylor, Selena, and none of the Kardashian clan are looking into it that deeply.
Or so I thought, until Selena up and DELETED the whole post!
Yup, one moment the photo of Selena chilling in her bathroom in her new skims was there, and the next it was gone.
But it wasn’t JUST gone. It was replaced with this photo of Selena hanging out with Taylor Swift.
Along with a very sweet caption, reading “Thank you for forever being by my side. You have taught me so much, walked through all of this with me, STAYED and you remind me to be a better human being. I’m on your side for life”.
Interesting, to say the least, that Selena is bringing up sides here.
Up until recently, a lot of people thought that the friendship between Sel & Taylor was over.
That was until last week, when Selena dropped her two new songs.
When “Lose You to Love Me’ came out, Taylor also went on her instagram story to support Selena and tell everyone how much she loved her new song.
She said “This song is a perfect expression of healing & my absolute favorite song she’s put out yet.
Taylor said about Selena, “She's been through so much. I've watched so much happen in her life and had a front row seat to so much, and I'm so proud of her.”
Sel said of Taylor, “She was frustrated when I was frustrated; she was sad when I was sad. I think they [Selena's friends] visibly saw me in so much pain. And they didn’t want it for me but they never stopped loving me.”
They also both subtly discussed Justin Bieber and the role that he played in inspiring these new songs.
But at the end of the day, the message is still loud and clear. Blood flows thicker than water. And friendship flows harder than an instagram story about some shapewear.
So, yes, of course these two are still bff goals. I don’t think that’s going to change anytime soon. But maybe, just maybe, we’ll get a collab this time around.
What are your thoughts? Do you think something happened between Selena & Taylor that she deleted her SKIMS Instagram story? Do you think it was someone from the inside? Or just fans who pressured her into deleting it? Let me know what you think in the comments below.
And then make sure you subscribe to Clevver News and we’ll keep you up to date with all the biggest music news and drama!
For More Clevver Visit:
Find us on Facebook:
Keep up with us on Instagram:
Follow us on Twitter:
Tweet Me: 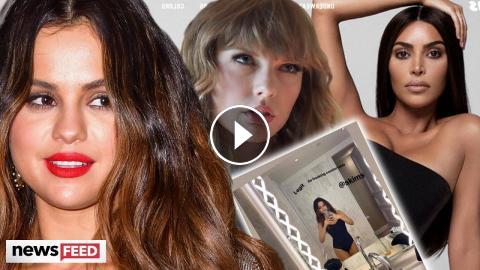