admin
Happy Songkran (เทศกาลสงกรานต์) 2018 from Bangkok, Thailand!
►SUBSCRIBE for 2 new videos per week:
►T-shirts and caps available now:
Songkran is Thai New Years (เทศกาลสงกรานต์), which takes place every year from April 13 - 15. It’s one of the most important periods of time in Thailand and the most celebrated holiday of the year. It’s a time when friends and family get to together to spend time with each other, eat, bless each other, and enjoy one of the biggest water fights in the world!
This year I decided to spend the first day of Songkran in Bangkok, on a Thai street food water fight tour of Bangkok. After getting dressed in my Songkran flower shirt, which I’m pretty happy about, we jumped on the BTS and headed to Sala Daeng station, Silom (สีลม). Silom is known to have one of the best walking street water fights during Songkran in Bangkok. It was busy, but there’s a lot of space as well.
As for Thai food during Songkran, if you’re having a family meal, you might have a nice seafood meal, but when you’re water fighting, probably the favorite quick meal on the go during Songkran is khao kai jeow (ข้าวไข่เจียว) - 30 THB ($0.96), a Thai omelet over rice. And we found the perfect hilarious man making omelets that puffed up to inner tube. I still don’t know how he did that!
Sai krok Isaan (ไส้กรอกอีสาน) - 10 THB ($0.32) - After some more water fighting in Silom, we ate some sai krok Isaan, sausage.
Khao San Road (ถนนข้าวสาร) - One of the most famous places to play water in Bangkok during Songkran in Khao San Road, and when we arrived there in the middle of the afternoon, it was hectic and packed, and pretty fun as well.
Khanom jeen nam ya kati (ขนมจีนน้ำยากะทิ) - 40 THB ($1.28) - On this Thai street food water fight Songkran 2018 tour, we stopped to eat khanom jeen nam ya kati, a fish and coconut milk curry served over soft rice noodles. It was pretty awesomely good, especially with some extra chilies and lemon basil.
Shawarma - 100 THB ($3.20) - After walking playing water on Khao San Road for a little while, we decided to try the shawarma at the front of the road. At first I didn’t order cheese, but when I saw she busted out the blowtorch, I needed it. Not the greatest shawarma, but it tasted pretty good at that time and place.
Cha yen (ชาเย็น) - 20 THB ($0.64) - Finally to end this Thai street food tour of Bangkok Songkran, we had a cha yen from a friendly man at the front of Khao San Road.
Wishing you and your family a Happy Songkran (เทศกาลสงกรานต์), Thai New Year, and all other New Year celebrations in this region of the world 2018!
Thank you for watching!
MUSIC:
***CAMERA GEAR*** I used to make this video (these are affiliate links):
Main camera:
Main lens:
2nd lens:
Microphone:
Drone:
I would love to connect with you!
Instagram:
Facebook:
T-shirts available now: 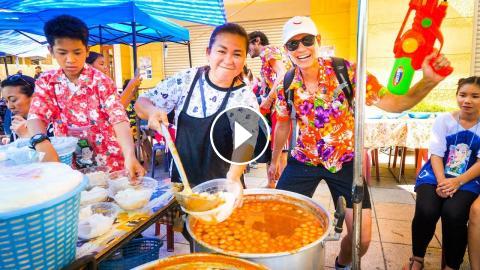