admin
More Celebrity News ►►
Excitement has been SO high ever since The CW announced The Originals spinoff series, Legacies, back in March. Another mystical adventure set in the The Vampire Diaries and The Originals universe? WIN.
The Vampire Diaries ended just last year, and The Originals will only see it’s series finale this year, so the fact that we really haven’t had to wait all that long is already enough to get us pumped, but we’re basically through the roof because The CW just revealed a little more insight into what we can expect to see from the spinoff, and more importantly, who we can expect to see.
The network has shared that Legacies is the story of The Originals’ Hope Mikaelson, portrayed by Danielle Rose Russell. Hope is the daughter of Hayley Marshall-Kenner and Klaus Mikaelson, aaaand a tribrid. You know, a vampire-witch-werewolf. Duh.
Hope is enrolled at the The Salvatore Boarding School for the Young and Gifted, a school who’s name speaks for itself, that was established in the series finale of The Vampire Diaries, and where Hope can be found currently during this season of The Originals. Now, her story will take on a life of it’s own in Legacies.
The official synopsis reads QUOTE “Continuing the tradition of The Vampire Diaries and The Originals, the story of the next generation of supernatural beings at The Salvatore School for the Young and Gifted. Klaus Mikaelson’s daughter, 17-year-old Hope Mikaelson; Alaric Saltzman’s twins, Lizzie and Josie Saltzman; and other young adults come of age in the most unconventional way possible, nurtured to be their best selves…in spite of their worst impulses. Will these young witches, vampires and werewolves become the heroes they want to be – or the villains they were born to be?
Yeahhhh, you can go ahead and count us in. The Vampire Diaries fans will also be pleased to hear that Matt Davis will be reprising his role as Alaric Saltzman from The Vampire Diaries. Alaric will definitely have a lot on his hands managing three teenage girls, because what we’ve heard about at least one of his twin daughters, who have only been mentioned in The Originals, is that trouble seems to find them.…Which only makes us more excited, let’s be real.
Now it’s time for you all to share your thoughts on Legacies, like what or who are you most looking forward to seeing on the show? Get the conversation started down in the comments. Thanks so much for tuning in to Clevver News, I’m Sinead de Vries, make sure you hit that subscribe button and I’ll see you guys next time.
For More Clevver Visit:
There are 2 types of people: those who follow us on Facebook and those who are missing out
Keep up with us on Instagram:
Follow us on Twitter:
Website:
Add us to your circles on Google+:
Tweet Me: 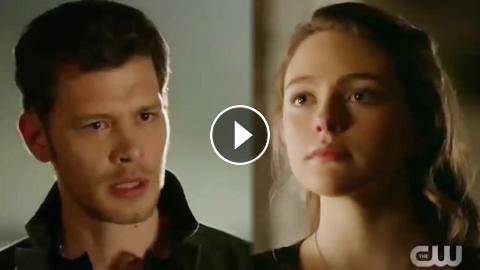 More Celebrity News ►► Excitement has been SO high ever since The CW announced The Originals spinoff series, Legacies, back in March. Another mystical...