admin
When I was visiting Saigon, one of the meals I knew I needed to try, was a Vietnamese style snail meal. Details coming soon.
Ốc is a word in Vietnamese that means snails, and they are extremely common to eat in Vietnam. Walking around Saigon you’ll find plenty of restaurants that have a host of unknown mollusk shelled creates, on display, that are ready to be cooked however you like them.
Located just down the street from the hotel where I was staying in Saigon (Ho Chi Minh City), was a street that was home to a number of different snail restaurants that opened up in the evening. After walking along the road a number of times, I decided to eat at Ốc A Sòi, a good looking Vietnamese snail restaurant with a few seats and chairs available right along the road.
Ốc A Sòi had a full menu, but I had no clue what to order, so rather than browse through the menu, I decided to go up to the trays of fresh snails and see which ones looked good. I literally only knew about what half of the snails were, the others I had no clue… that’s part of the fun of eating and traveling. All the staff at Ốc A Sòi were extremely nice, and they patiently waited as I took my time choosing which snails to eat, and even making suggestions about snails they thought I would enjoy. Once you’ve chosen which snails you’d like to eat, you can then order them cooked in a number of different ways, from stir fried to steamed with lemongrass, to sautéed and coated in salt and chili. I chose a number of different snails and methods of cooking, and then happily sipped on a Saigon beer as I waited for our meal to arrive.
The first Vietnamese snail dish I tried in this video was Ốc hương rang muối ớt, Babylonia areolata snails, that were sautéed and coated in a salty chili and lime seasoning. The snails were a little on the chewy side, a little like squid, and the seasoning was flavorful and salty - definitely a good beer snack. One of the snails that I had seen at the front of the restaurant was ốc len xào dừa, mud creepers that were curried in coconut milk and topped with Vietnamese coriander. They were almost the texture of oysters, slimy and slot, and coated in sweet coconut milk. Probably my favorite Vietnamese dish of the meal was sò điệp nướng mỡ hành, I guess not even snails at all, but they were scallops, roasted over charcoal, and topped with scallion oil and chopped peanuts. The combination was something I’d never had before, and it was incredibly delicious. For my last snail, I had ốc tỏi, a huge snail that tasted almost like squid, and had a lovely sweet flavor.
I had an amazing time eating snails and shellfish seafood in Saigon, and not only was the food good, but just like much of the food in Vietnam, the atmosphere of the restaurant and the culture of eating was fantastic. There are many snail restaurants to try in Vietnam and throughout Saigon, but I went to Ốc A Sòi since it was right down the street from where I was staying.
Music from audionetwork.com
Check out our websites: &
Get the Eating Thai Food Guide:
If you love food, remember to subscribe now! 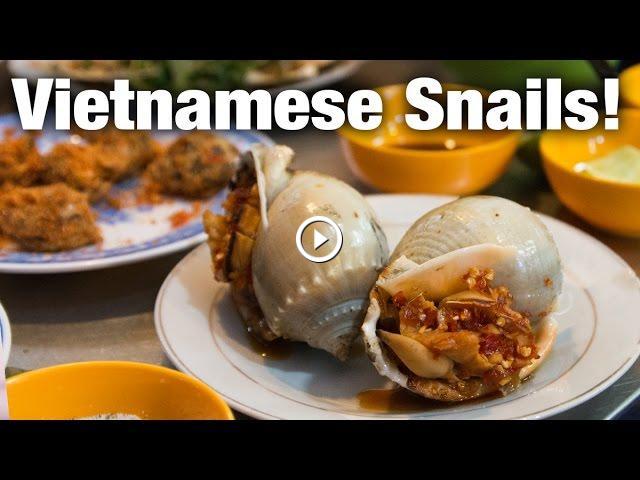 When I was visiting Saigon, one of the meals I knew I needed to try, was a Vietnamese style snail meal. Details coming soon.Ốc is a word in Vietnamese...