Zuraida: Anwar tried to convince me on Azmin sex video

admin
PKR vice president Zuraida Kamaruddin tonight alleged PKR president Anwar Ibrahim tried to convince her that a sex video featuring party deputy president Mohamed Azmin Ali was real.
Zuraida added that Anwar, in trying to convince her, went on to claim that Mahathir had requested for Anwar to sack Azmin.
However, Zuraida said she did not buy into the claim.
"I met Anwar three months ago. He (Anwar) said the video is really Azmin. Police say it is Azmin. I said if it was Azmin, let the police investigate and Azmin will have to accept it if it is real.
"Anwar said he (Azmin) is like a younger brother and that he pitied him so I said if that was true then help him.
"Then he claimed that Mahathir asked him to sack Azmin. But if that were true, then why did Mahathir issued up to four statements stressing that Azmin didn't need to go on leave.
"He said you don't know how Mahathir is like... Indeed, I don't know how Tun is like but neither do I know you," she told some 2,000 people at a gathering of Azmin's supporters in Kuala Lumpur today.

Zuraida: Anwar tried to convince me on Azmin sex video 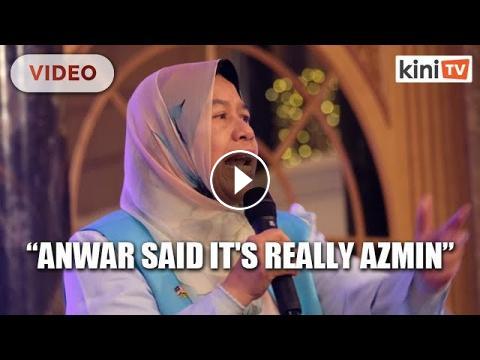