admin
1961 Alfa Romeo Giulietta Spider by Pininfarina
Sold For $88,000 Including Commission
RM | Sotheby's - AMELIA ISLAND, Florida 2015
Chassis No.AR 170763
Engine No.00102 26104
A classic example of al fresco Italian motoring
Traditional red over black color combination
Recent restoration
74 bhp, 1,290 cc DOHC inline four-cylinder engine, four-speed manual transmission, independent front suspension and solid rear axle with four-wheel coil springs, and front and rear hydraulic drum brakes. Wheelbase: 88.6 in.
The Alfa Romeo Giulietta, first seen at the 1954 Turin Motor Show in coupe form, was intended as a small platform that could easily cut through narrow European streets with ease. Alfa went on to produce a saloon version in 1955, and at the request of U.S. importer Max Hoffman, a convertible variant of the Giulietta was also produced in that same year. The spider was based on the Sprint, and it utilized a variant of Alfa Romeo’s 1.3-liter, four-cylinder engine, which could produce 74 horsepower. The convertible weighed in at 1,896 pounds and was 121 pounds lighter than its coupe sibling, which translated into marked improvements in performance and resulted in a top speed close to 100 mph.
This Giulietta Spider, chassis number AR 170763, was completed on August 23, 1961, and sold on September 6, 1961, to Alfa Romeo Inc. in Newark, New Jersey. According to records from Automobilismo Storico Alfa Romeo, it was originally finished in white, with either a red or black interior. While its earliest ownership history is currently unknown, it is believed that this beautiful little Alfa made its way to the West Coast early on in its life, which is where the previous owner acquired the car, and it was then brought to Tampa, Florida. In Florida, the Giulietta spent the next six years serving as the mascot for the Tre Amici café in Ybor City, a historic district of Tampa.
In 2012, the Alfa Romeo was acquired by the consignor, who subjected the Spider to a complete restoration. Work began on what was described as a rust-free body by the Florida Classic Cars restoration ship in Tampa. The body was taken down to bare metal and repainted in red, as it had been when acquired. All trim pieces were rechromed or replaced with new ones where needed, and the car also received all new rubber trim and body seals. The black vinyl seats were reconditioned, and the interior was trimmed with new carpeting throughout. Additionally, the Spider received a new matching black cloth top to protect its occupants from a quick downpour. The steering wheel is in excellent condition, as is the chrome horn ring, which has also been rechromed. The dashboard pad and controls are in equally fine order.
The undercarriage was stripped and painted as new, while the engine compartment is clean and tidy. Mechanically, the engine was sorted where needed, including a rebuilding of the carburetor. The brakes have also been properly sorted to ensure that this sprightly Spider stops as well as it goes.
The Giulietta Spider is one of Alfa Romeo’s most iconic post-war automobiles, and it represents an affordable way to step into classic Italian motoring. Upon testing an Alfa Romeo Spider, Autocar magazine wrote that “there is no more desirable small sports car; it sets standards of performance, handling, and refinement that very few others can match.”
More Info Here:
Robert Myrick Photography© 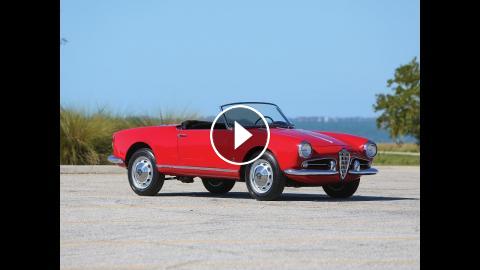