admin
1962 Alfa Romeo Giulietta Spider by Pininfarina
Sold For $55,000 Including Commission
RM Sotheby's Auction Monterey, California 2015
Chassis No. AR10103 171805
Alfa Romeo’s iconic Giulietta Spider
Only 1,000 miles since restoration
Remains very clean and tidy throughout
80 bhp, 1,290 cc DOHC inline four-cylinder engine, four-speed manual transmission, coil-spring independent front suspension, live rear axle with coil springs, and four-wheel hydraulic drum brakes. Wheelbase: 88.6 in.
A racing breed from its inception, A.L.F.A., as the company was then known, entered two cars in the 1911 Targo Florio. By 1920, sporting models were being produced, and that year, the company had its first racing victory when Giuseppi Compari won at the Mugello circuit. For all its innovation, though, Alfa Romeo remained a niche marque, with its annual production only in the hundreds. Like most automakers the world over, they emerged from World War II with cars of pre-war design. Unlike most of the others, however, Alfa’s were more than up to date, having pioneered features like double-overhead camshafts and independent suspension in the 1920s.
Alfa Romeo’s first new post-war design was the 1900, which was introduced in 1950. It had two major advances over the pre-war carry-over models, unitary construction and a compact twin overhead-cam four-cylinder engine. Sedan models sold well, with production reaching nearly 4,000. A coupe with a body by Carrozzeria Touring of Milan was sold as the “Sprint,” and Pinin Farina of Turin countered with a soft-top Spider.
The second new post-war design was the Giulietta, which was introduced in 1954. Whereas the 1900 appeared first as a sedan, the Giulietta bowed as a Sprint coupe, designed by Franco Scaglione at Bertone. The sedan (Berlina) came several months later in the spring of 1955. Mid-year saw the introduction of the convertible spider, designed and built by Pinin Farina, such as this example.
The engine was a 1,290-cubic centimeter dual overhead-cam four-cylinder with a light alloy block and hemispherical cylinder head. The Sprint and spider models made 80 brake horsepower; a Veloce engine with twin Weber DCOE carbs was rated at 90 brake horsepower. The transmission was a four-speed manual, while hydraulic drum brakes and worm-and-sector steering were tried and true technology.
This delightful Spider was acquired by the consignor in 2009, following a restoration by its previous owner. Well maintained since, this Alfa Romeo Giulietta Spider has been driven less than 1,000 miles since its full mechanical and body rebuild. A recent brake system overhaul has resulted in full-spec performance, which its free-revving twin-cam engine happily exploits. Featured in a Hemmings Sports and Exotic Car article on the Giulietta model, it runs and drives as an Alfa should. Finished in the archetypal Alfa Romeo red, its medium grey interior contrasts with dark grey piping and is topped off with a black roof. Tidy throughout, it is ready to be enjoyed.
A red Alfa Romeo Spider, albeit the later Duetto model, upstaged star Dustin Hoffman in the 1967 film The Graduate. On a spirited drive in this car, one would be fully justified in feeling like a film star.
Robert Myrick Photography© 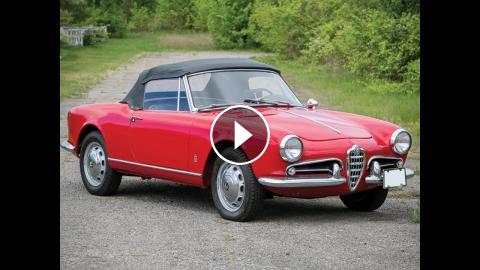