admin
1969 Ferrari 365 GTB/4 Daytona Berlinetta by Scaglietti
Sold for $775,500 Including Commission
RM Auction, Monterey, CA. 2014
352 bhp, 4,390 cc DOHC V-12 engine with six Weber carburetors, five-speed manual transmission, independent front and rear suspension with unequal length wishbones and coil springs over telescopic shock absorbers with anti-roll bars, and four wheel disc brakes. Wheelbase: 94.48 in.
•Formerly of the Bob Pond Collection
•A European-specification example with a Plexiglas nose
•The fastest production car in the world upon its introduction
The 1968 Paris Salon saw the introduction of Ferrari’s newest generation of grand touring berlinettas. The car was dubbed the 365 GTB/4, and it quickly picked up the moniker of “Daytona” from the general public in honor of the marques legendary 1-2-3 finish at the 1968 24 Hours of Daytona. Its shape was markedly different from the 275 series of Ferraris that preceded it, but it was still sumptuous none the less. Its body was both angular and curvaceous at the same time, evoking a sense of speed unparalleled by anything else on the market at the time. From the moment it was unveiled, it was an icon of both speed and style, and almost everyone who saw the car desired to put one in their garage, but only the privileged few could afford to do so.
The 4.4-liter Colombo-derived V-12 proved to be quite capable of providing its driver with all the speed he or she so desired, and when topped with six Weber carburetors, output stood at about 350 horsepower, which provided for a very impressive 0–60 time of 5.9 seconds and a top speed of 174 mph, the highest top speed of any production car ever produced at its introduction. But this was no stripped-out racer built simply for speed. Like the other Ferrari berlinettas before it, the Daytona’s interior was wrapped in sumptuous leather and proved to be a wonderful place to be in for long journeys. The boot was more than big enough for a weekend’s worth of luggage for two, proving that it was versatile enough to tangle with other high-strung European sports cars on the track or even be used as a daily driver by a discerning enthusiast.
According to noted Ferrari historian Marcel Massini, chassis number 12691 was completed by the factory on June 30, 1969, as a European delivery model, and it sported a Rosso Chiaro (20-R-190) exterior with a black stripe along the body flanks, a beige interior (VM 102), and the distinctive Plexiglas headlights fitted to early European-delivery models. The following month, it was delivered to official Ferrari dealer M. Gastone Crepaldi S.a.s. in Milan, and then, it was subsequently delivered to its first owner, a Mr. Pagni, also of Milan, that same month.
After spending its first few years of life cruising Italian autostradas, the car was imported to Texas in 1974. There, it was sold to Thomas J. Nolan Jr., of Bryan, Texas, and was subsequently placed in storage for the next 12 years. Massini notes that the car was then sold from Texas to California in 1988.
Bob Pond purchased this Daytona, along with a 1983 Ferrari 512 BBi, as well as the 1973 Ferrari 246 GTS offered from his collection today, in the spring of 1989 from The Fine Car Store in San Diego, California. While the car was in the custody of The Fine Car Store, it was mechanically and cosmetically restored by Ferraris Only, of San Diego, California, to bring it back to road-worthy condition. A Bill of Sale included in the car’s documentation file lists the odometer as showing 31,710 kilometers, which converts to 19,002 miles, as is also written on the Bill of Sale. As shown by service receipts from Ferraris Only, the restoration work continued into the first few months of Pond’s ownership, ensuring that it would be in pristine condition for display in his collection. As the car has seen limited mileage since new, a thorough inspection is advised prior to extended use.
Daytonas are just as desirable today as they were when they were new, and they have proven to be one of Ferrari’s most iconic and memorable designs, with world-beating performance to cement its name into the history books. This particular Daytona shows just over 2,000 additional kilometers on its odometer since it became part of the Pond Collection, and its restoration has definitely stood the test of time. As such, it would surely be an excellent example to drive and enjoy. Plexiglas Daytonas are considerably rarer than their younger siblings, and they always garner a significant amount of attention, even at the most well-attended events. This Daytona, which has been retained in the Bob Pond Collection for the past 25 years, would surely revel on the open roads of Europe or North America, just as it did when it was new.
Robert Myrick Photography 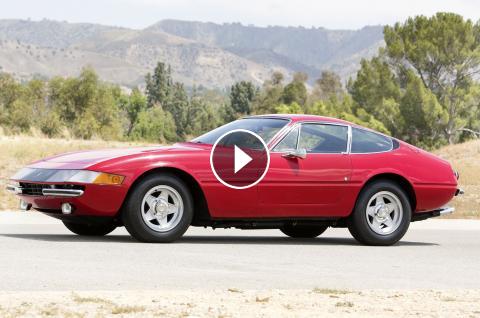