admin
1972 Ferrari 365 GTB/4 Daytona Spider by Scaglietti
Sold for $2,750,000 Including Commission
RM / Sotheby's Auction, Monterey, CA. 2015
Pinnacle Collection
Chassis no. 16223
Engine no. B2136
Gearbox no. 1066
352 hp, 4,390 cc DOHC V-12 engine with six Weber 40 DCN17 carburetors, five-speed manual transaxle, independent front and rear suspension by coil springs and wishbones, and four-wheel hydraulic disc brakes. Wheelbase: 94.5 in.
•Exceedingly rare; the 66th of only 121 genuine Daytona Spiders
•A U.S.-delivery example; fitted new with air conditioning and Borrani wire wheels
•Offered with a correct set of books and tools
•One of Ferrari’s most iconic open-top sports cars
•Matching numbers
“And now, my friend, the first rule of Italian driving. What’s behind me is not important.”
Perhaps the most memorable moment from the film The Gumball Rally was that phrase, which held quite a bit of truth in 1976. When driving a Daytona Spider at that time, there was little that could keep up with Ferrari’s fastest drop-top and few cars that would look as good as the Daytona did at speed. When the film first hit the silver screen, the Daytona had been out of production for nearly three years, but there were still few automobiles that could deliver the requisite amount of performance, as well as visual and aural theater, that a Daytona Spider could. For representing the Italians in The Gumball Rally, there was truly no better car.
CHASSIS NUMBER 16223: AN AMERICAN SPIDER
This car, the 66th of 121 Daytona Spiders constructed by the factory, was ordered new by James Lewis Meador, of Roanoke, Virginia, through Algar Enterprises, the famous official Ferrari distributor based in Rosemont, Pennsylvania, on September 7, 1972. According to the car’s order form from Algar, Meador specified factory delivery and that it was to be outfitted with a Blaupunkt radio and air conditioning and trimmed in a unique color combination of Rosso Chiaro (20-R-190) over a Bianca leather with Blu inserts and carpeting, which was a fitting and patriotic color combination for a U.S.-delivery Daytona Spider. The order form specified that the car was to be delivered on or around December 1972. However, shipping records and documentation from Algar and Ferrari, which are supplied with the car, support the fact that the car was not delivered to Meador until mid-1973 and that it was instead fitted with a Becker Mexico radio.
The Daytona Spider had made its way to Florida in 1975, in the ownership of Richard Katz of Coconut Grove, Florida, who had purchased the car from Joe Marchetti. Katz owned the car for just a year before selling it to Alan R. Patterson, of Pittsburgh, Pennsylvania. At the same time, Patterson also owned a 250 LM, chassis number 6025, the one-off Pininfarina-bodied LM that was shown by Pininfarina at the 1965 Geneva Motor Show.
After Patterson’s ownership, chassis number 16223 was purchased by Jean Banchet, the owner of Le Français, a highly acclaimed restaurant in Chicago, Illinois, and perhaps this Daytona Spider’s most well-known owner. Banchet retained the car until 1988, and it was eventually sold to Stuart Hayim, of Los Angeles, California. Upon receiving the car, Hayim decided to have his new Daytona restored. The body was stripped and repainted Red by Mike McCluskey. The famed Tony Nancy was commissioned to complete work on the interior, which was refinished in black leather, and the car was fully detailed by Bill Lazelere. At the same time, the engine was removed and serviced by Bruno Borri, of Modena Sports Cars.
Following its $75,000 restoration (a substantial figure in 1988), chassis number 16223 was purchased by Dennis Farey in January 1992. Farey displayed the car at the 30th annual Ferrari Club of America International Concours d’Elegance at Monterey, where it won a Gold award. The car was also shown in his ownership at the Palo Alto Concours d’Elegance, and it would later be featured in articles in Forza and Millionaire magazines in 1998.
Bill Kling, of Malibu, California, would be the next owner, purchasing this car, with 27,375 miles on its odometer, in July 2000. He entrusted the Daytona Spider to GT Motors of Glendale, California, for a complete mechanical overhaul, which included rebuilding the half-shafts, the drive box, and the steering box, as well as rebuilding the transmission with new synchros. The engine received new gaskets and a valve job, and the suspension was restored, with parts being replaced and refinished where necessary.
More Info Here:
Robert Myrick Photography 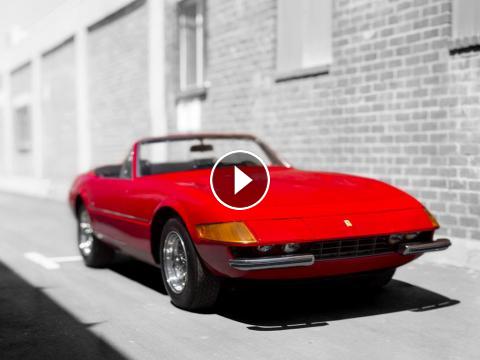