admin
More Celebrity News ►►
First of all, lest we not forget that just last year her sister Gigi was manhandled leaving a Milan fashion show, to which Gi elbowed the creep in the face. Now at this year’s Fashion Week, Bella used her words to get the same message across: Stop touching women without women’s consent! Bella was leaving the Michael Kors show and found herself in a bit of a scuffle. Her team of security was doing their part in keeping her at arms distance from the paps, but one dude took things a little too far and got handsy with a female photographer, to which Bella swooped in and gave him a piece of her mind.
TMZ captured the footage of Bella rushing to the aid of the photog who was aggressively shoved, proving that not all heroines wear capes. Take a look:
Following the confrontation between Bella and the security guard, where she asks him to “please not touch her,” he becomes slightly defensive and shakes his head, and she was like- uh-uh! So Bella reiterates one more time, “Do not touch her.” She then checks in on the photographer asking, “Are you ok?” before moving on.
Security are hired to ensure the physical safety of celebrities, but that does not give you permission to manhandle a woman- even if she is a paparazzi! And if you see someone being aggressive toward another female, speak up yall! We’ve gotta have each other’s backs. Do yall agree or disagree? Let me know below or start a debate directly on my socials. @Miriamisa on twitter and follow me on my Insta yall @Miriam_isa, then click here to see the truth bomb Zayn dropped about his friendship with Harry, and as always be sure to hit that subscribe button. Thanks for watching Clevver News, I’m your girl Miriam Isa and I’ll see you next time
For More Clevver Visit:
There are 2 types of people: those who follow us on Facebook and those who are missing out
Keep up with us on Instagram:
Follow us on Twitter:
Website:
Add us to your circles on Google+:
Tweet Me: 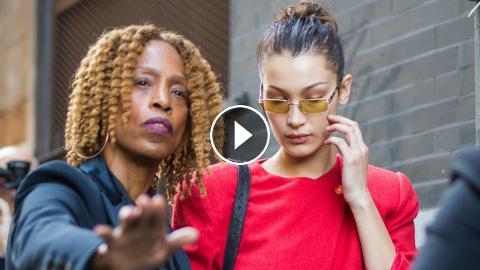 More Celebrity News ►► First of all, lest we not forget that just last year her sister Gigi was manhandled leaving a Milan fashion show, to which Gi e...