ava
James Corden connects with a Canadian school teacher whose class has organized a hotline for senior citizens to call and listen to a joke, and to thank him, Billy Crystal pops in to the chat to record a few jokes of his own. The number for the Ever After School project is 1-877-JOY-4ALL. 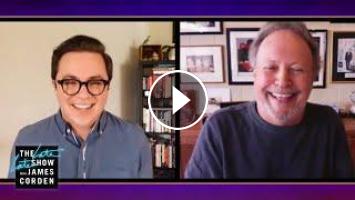 James Corden connects with a Canadian school teacher whose class has organized a hotline for senior citizens to call and listen to a joke, and to than...