admin
At the recommendation of a friend, we visited Wat Suan Dok in Chiang Mai, Thailand to eat Thai vegetarian food at Pun Pun Restaurant (formerly and briefly known as Imm Aim) just outside of the Thai Buddhist temple grounds.

With an open air kitchen and self serve drinking water, we appreciated the simple decor and minimalist design.

The menu featured an array of vegetarian options (all very well priced) including Thai favorites, gourmand salads and International curries.

The hardest part for us was settling on a course of main dishes to sample. We ended up going with deep-fried spring rolls, mixed salad with cheese and a spicy coconut Indian curry with roti.

The spring rolls were the best we've had in Chiang Mai. Loaded with vegetables and spices they were done to perfection.

The mixed salad was a mountain full of various vegetables, beans and chunks of cheese. Again, this was pleasing to the palette.

Finally, the spicy Indian curry was made with a coconut base and had large chunks of assorted vegetables that we sopped up with wedges of roti flat bread.

Although we were stuffed we decided to order dessert: bananas in coconut milk pudding and honey ginger tea with wedges of sweet potato.

In total we paid 300 Baht (slight less than $10 USD) for two coconut shakes, three main dishes and two desserts. This was easily one of the best value Thai meals we've had since coming back to Chiang Mai.

My only regret is that we're leaving soon and that we may not have a chance to come back before we head on a slow boat bound for Luang Prabang, Laos.

Today we are at Wat Suan Dok and we hear there is an amazing restaurant on the temple grounds. It is called Imm Aim and it used to be called Pun Pun, so that is what we're searching for right now.

It is a vegetarian restaurant and it has come highly recommended from a friend but before we go have lunch we're going to go for a wander around the temple.

So far I'm kind of enjoying the minimal design here and they have a really cool outdoor open kitchen. You can see them preparing your food.

The do it yourself water reminds me a lot of being back in Korea where we used to eat at the Kimbap restaurants and we would go up and grab our own waters.

Our first dish has arrived - the vegetarian spring rolls. It is hot. I'm burning my mouth but this is really good. These are definitely some of the best spring rolls I've had here in Chiang Mai. Have a look inside. It has bean sprouts, glass noodles, some vegetables. It is really flavorful. They've added some nice spices in there.

There comes the rest of our food. It looks amazing. Let's get back to your spring roll. I got distracted there. Have a bite! Yeah, these are excellent. My favorite part about this is the tamarind dipping sauce. That is really unique and tangy.

The masterpiece of a salad has arrived. Ooh lah lah. What kind of sauce is that? I think it may be pumpkin based on the color. We'll see.

This is a really healthy salad. If you look over here you can see we have some green beans, red beans, corn and there is even some barley and of course we love cheese so we had to get some feta cheese on top. Only an extra 20 Baht. I would say it was well worth it. Oh, yes. How is it? That's wonderful. So good you've have three bites and I haven't had any.

We have a little taste of India happening over here. Indeed, we do. This here is a little bit of roti flat bread and this is the Indian curry. I don't really know what is in it so it'll be an interesting first bite. It is nice and thick. I can tell that. It looks like it has a lot of vegetables. That's wonderful. It has got a coconut base. It is spicy and yeah I can taste a lot of different vegetables in there.

That would be our dessert. This was listed as sweet potato honey. Sweet potato tea on the menu, so I was expecting a tea cup but apparently it is a dessert. Tea in a spoon. It tastes like ginger. That is ginger tea. That is not sweet potato.

This is my dessert which I'm kindly sharing with Sam. Oh, yeah, I don't recall that part of the deal. Anyways, we're having bananas with coconut milk and if you look down here you can see giant slabs of banana. I'm going to take one of those and make sure I've got lots of coconut milk too.

That is the face of satisfaction. Yeah?

That awesome feast came to 300 Baht which is 10 USD and that included two shakes, three main dishes and two desserts. That is a lot of food for ten dollars for two people. 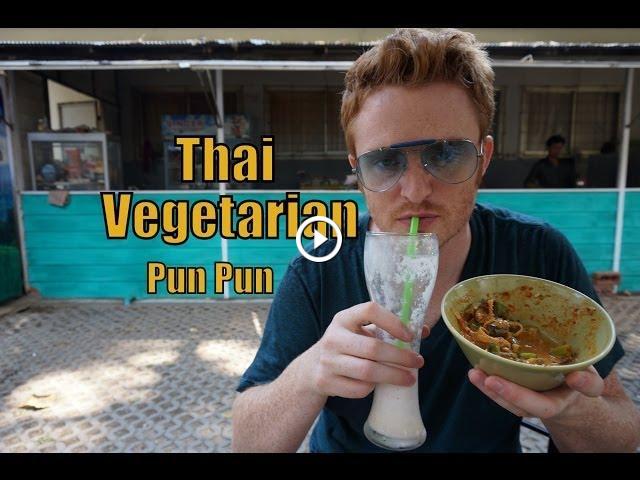 At the recommendation of a friend, we visited Wat Suan Dok in Chiang Mai, Thailand to eat Thai vegetarian food at Pun Pun Restaurant (formerly and bri...