admin
While in Finland we planned on doing a Finnish candy taste test including sampling Finnish chocolate, Finnish licorice and Finnish Salmiakki; however, we completely ran out of time. After raiding a Finnish supermarket we stocked up on as many products as we could and stuffed them into our already tightly packed suitcases to try back home in Canada.

One of the things to do in Finland is to experience Finnish culture by sampling its wide range of cuisine and snack foods (junk food).

For the most part we found all of these Finnish treats to be especially delicious; however, Audrey thought the licorice and Salmiakki were disgusting - an opinion shared by my foreigners.

Overall, this is the complete list of Finnish food products we sampled:

We were hoping to do a Finnish chocolates and candy bar while we were in Finland but unfortunately we ran out of time. So we're now back at home in Canada and we're just sitting in my backyard and today we are going to be taste testing all of this candy. First off we are starting with this little Jim bar. It has a very fruity flavor. This is called Lakupala and it is Tropico. Apparently, there is dark chocolate, orange, berries and possibly pineapple. So I was reading up on this chocolate bar and apparently Tupla means double because you get two little bars inside of the package. Okay, so it is milk chocolate and nuts on the exterior. And then I think the filling might be nougat. It is kind of chewy and very sugary. Angry birds originated from Finland and they have a little candy bar. It is a very sugary licorice and it is pineapple flavored inside. Here I have Moomin gummy bears. So if you're not too familiar with Moomins, they're actually characters from a Finnish fairy tale. No Finnish taste test video would be complete without testing Salmiakki. This is a treat that is absolutely adored in Finland but a lot of foreigners don't like it. It is extremely salty. It is made with Ammonium Chloride. It is like a black type of licorice except it is so much saltier than any kind of licorice I've ever had. I love it. So next up we have some Jenkki spearmint gum. So I actually have a few Finnish Canadian friends and whenever they come back from Finland this is what they bring back. I've actually had this several times before in Canada. Aside from Salmiakki, my next favorite Finnish food is Karl Fazer chocolate. This is your standard Karl Fazer chocolate bar. It is just so creamy and delicious and I like that sure it is sugary but it is not too sugary. That is a big difference between European and American chocolate is that there is more creaminess and richness to European chocolate whereas American chocolate is really sugary. While we were in the supermarket looking for different chocolate bars we could try we came across Karl Fazer bar but as you can see over here this one is Chili and Crisps. So I've never had chocolate with chili before. There is something crunchy in there for sure. Okay, actually when you swallow the chocolate there is a slight burn in your throat. I think there is a chili.The best way to describe the licorice all sorts. Some of them are more sugary, some of them have more of a licorice taste, some of them are more chewy, so you've just got to grab a whole bunch of them, taste them one by one and see which one you like the most. And I saved one of my favorites for last - this is the Geisha chocolate bar which is also produced by Karl Fazer. That is really nice. So yeah, this one is a milk chocolate and it has a creamy hazelnut filling. Perfection. So that concludes our Finnish taste test. Let us know if you've tried any Finnish chocolates, licorice, gummy bears or Salmiakki. We're curious to know.

Music in this video courtesy of Audio Network 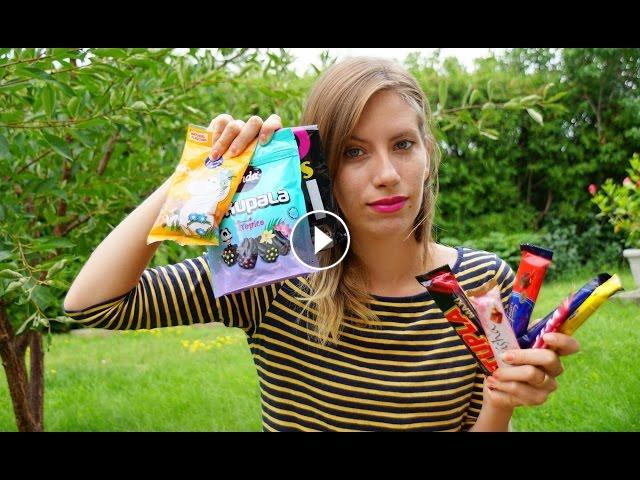 While in Finland we planned on doing a Finnish candy taste test including sampling Finnish chocolate, Finnish licorice and Finnish Salmiakki; however,...