Added 1 week ago by admin
14 Views
More Celebrity News ►►
James Charles is not here for fake news! The youtuber blasted an LGBTQ+ outlet claiming they photoshopped his photo for clickbait and are spreading false HEADLINES! 2020 is NOT the year to mess with this Sister!
What’s up guys, I’m Emile Ennis Jr. with Clevver News and just WAIT til you see this picture! They certainly didn’t do James any favors…
A fan posted this photo onto Twitter from the outlet, Pink News, which touts itself to be “The world's most read and watched LGBT+ digital media publisher.” In the obviously altered photo, James appears to have several worry lines on his forehead, a face full of freckles, and an over exaggerated lips.
The fan wrote, “@jamescharles girl what have they done to you?
A quick side by side shows that the Pink News photo is clearly photoshopped to make him look haggard.
The 20 year old makeup artist responded to the post, blasting Pink News. He wrote:
“I’m so sick of this. @PinkNews is a joke. They claim to be a LGBTQ+ news outlet yet choose to clickbait ugly edited photos & completely false titles about me literally EVERY OTHER DAY instead of reporting about actual things going on in our community.”
We took a quick look at Pink New’s twitter page and they often run with salacious headlines like, “Prince Harry and Meghan Markle just added ‘having a wife and not wearing camo’ to the list of things homophobes find ‘gay.’”
SO many fans agreed including this one who wrote:
“finally someone said it. they are an awful source for any kind of news at all. they are disgustingly dragging people and making people think badly of celebrities because of their choice of clickbait.”
And this one who said:
“That edit isn’t even realistic to begin with and secondly wtf, report something important instead of dumb lies about someone amazing.”
Others suggested that James should file a lawsuit against the media company. We don’t yet know what action the youtuber will take, but calling out people who’ve done him wrong is certainly James’s style.
Last year, James put the brand Wet n Wild on blast after they released an eyeshadow palette that looked VERY similar to the palate he released with Morphe. Take a look for yourself:
James tweeted:
That’s crazy... your “NEW” palette looks extremely similar.
And fellow youtubers noticed the similarities too….
Despite the obvious parallels, James never took official legal action against Wet n Wild. Some fans even preferred the dupe since it was considerably cheaper than the Morphe edition. Jame’s palete was $39 while Wet n Wild’s was $25.
But wherever the youtuber goes, drama seems to follow… James kicked off 2020 with TWO fresh media controversies.
On New Years Eve, the youtuber partied it up just like the rest of us. And of course, he was documenting the festivities on social media. But fans quickly pointed out a potential major party foul. James was accused of using a horrible racial slur while singing along to music at the club.
James, however, was quick to set the record straight. He wrote on Twitter:
no? turn up the volume & listen, I skip over it. how stupid would I have to be to confidently record a video of me singing the n word and still have it up the next morning
Just a couple days later, the youtuber was caught in another scuffle when he allegedly made a transphobic joke that rubbed many the wrong way. In response to the United States and Iran’s conflict in the middle east, World War III started trending, making many people worry about a nationwide draft, which often affects young adult men.
James chimed in with this tweet of himself dressed in drag and wrote:
me when the government comes knocking on my door for the draft
Some fans were highly upset, including this one who responded:
This is transphobia at its finest!
James, again, was quick to cover his tracks writing in part:
it’s a lighthearted joke regarding the fact that I had to register for the draft when I turned 18, just like every other boy, & i don’t wanna fight in a war. that’s all.
Alright, let’s hear from you. What do you make of all these controversies that seem to follow James this year? What do you think of his clapbacks?! Also how about his most recent call out for the altered photo on Pink News? Should he sue the news company like some are suggesting?
Let us know in the comment section below! And make sure you subscribe to Clevver News for all the latest updates on your favorite youtubers like James!
I’m Emile Ennis Jr., thanks for watching! See you next time!
For More Clevver Visit:
Find us on Facebook:
Keep up with us on Instagram:
Follow us on Twitter:
Tweet Me: 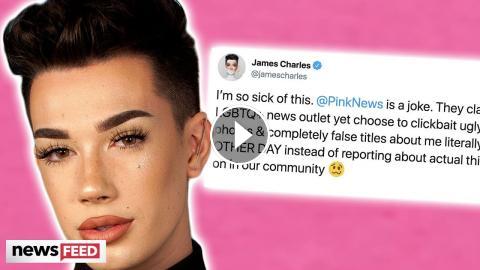 More Celebrity News ►► James Charles is not here for fake news! The youtuber blasted an LGBTQ+ outlet claiming they photoshopped his photo for clickba...