Jo Ellen Pellman Missed the Fanfare of 'The Prom'

ava
James Corden connects with his co-star from "The Prom" Jo Ellen Pellman who has been quarantined with loved ones since the start of the pandemic, causing her to miss the fanfare of her first film being released. James asks Jo Ellen about her nerves working with stars like Meryl Streep and Nicole Kidman in her first film, and Jo Ellen tells James about her work creating the Unruly Hearts Initiative to help connect LGBTQ+ with resources to help.

Jo Ellen Pellman Missed the Fanfare of 'The Prom' 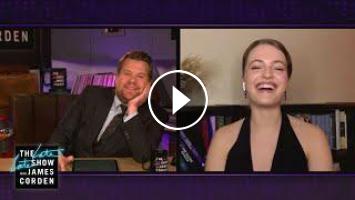 James Corden connects with his co-star from "The Prom" Jo Ellen Pellman who has been quarantined with loved ones since the start of the pand...