admin
More Celebrity News ►►
Kylie Jenner and Tyga have been killing it making their presence known at New York Fashion Week and recently cheered on Kendall at the Alexander Wang show while Tyga lint rolled Kylie’s feet and bought her Gucci.
It’s a hard life when your boyfriend grooms your feet and buys you expensive gifts, but somehow Kylie is able to manage.
Kylie and Tyga attended the Alexander Wang fashion show on Saturday night as official members of the Wang Squad for the designers fall campaign. They sat front row on full display seated next to none other than Nicki Minaj as they cheered on Kendall strutting the runway. You know Kylie caught it on snap, take a look:
Kylie rocked an Alexander Wang dress to the show and even had a personal fitting with the designer before attending. It’s a hard knock life. As the night was coming to a close, Kylie snapchatted post show personal time with Tyga back at their hotel room where he lint rolled her feet and gave his two cents about her pedicure. Take a look:
But lint rolling Kylie’s feet wasn’t the only pampering Tyga spoiled Kylie with. She then documented the unwrapping of a brand new Gucci purse that Tyga gave her to match a travel bag of his own. It’s no secret that Kylie loves her purses and even more so her glam squad. She even brought along her own personal professional lighting to New York to set up in her penthouse for all hair and make-up needs. All I have to say is, don’t hate, congratulate. I want to hear what you guys think about Kylie’s weekend at New York Fashion Week so share your thoughts in the comment section below, and then click right over here for a rundown of 7 times Kim Kardashian clapped backed at haters. And as always, don’t forget to subscribe. Thanks for watching Clevver News, I’m your host Drew Dorsey and I’ll see you next time.
For More Clevver Visit:
Website:
Like us on Facebook:
Follow us on Twitter:
Keep up with us on Instagram:
Add us to your circles on Google+:
Tweet Me: 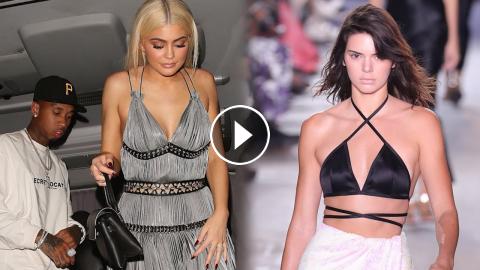 More Celebrity News ►► Kylie Jenner and Tyga have been killing it making their presence known at New York Fashion Week and recently cheered on Kendall...