ava
James Corden and Neil deGrasse Tyson reunite over a year after Neil was supposed to appear on the show before we all went into lockdown for COVID-19, a societal test he feels we largely failed. After discussing the importance of science literacy as it relates to our longevity as a species, Neil shares some of the takeaways from this experience we should hold on to when we go back to "normal." And James asks Neil about the inspiration for his new book "Cosmic Queries." 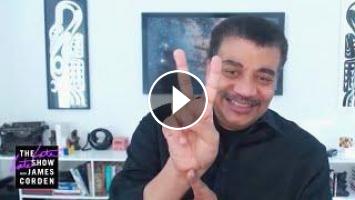 James Corden and Neil deGrasse Tyson reunite over a year after Neil was supposed to appear on the show before we all went into lockdown for COVID-19, ...