ava
James Corden connects with Senate Majority Leader Chuck Schumer from his office in the U.S. Capitol, which is located just feet from a critical area hostile invaders were led away from during the January 6 insurrection. The two discuss wood log fires, the details of the COVID-19 relief bill just passed and the efforts to pass legislation for the minimum wage and student debt. And Sen. Schumer breaks one of his staff's long standing rules about public appearances. 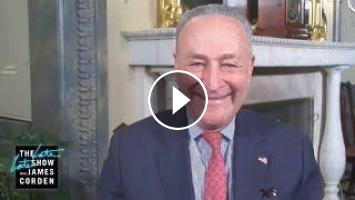 James Corden connects with Senate Majority Leader Chuck Schumer from his office in the U.S. Capitol, which is located just feet from a critical area h...