ava
After hearing about Naftali, a 13-year-old from Borehamwood, England who had a virtual Friends-themed bar mitzvah, James Corden enlists his friend Courteney Cox to give Naftali the surprise of a lifetime. 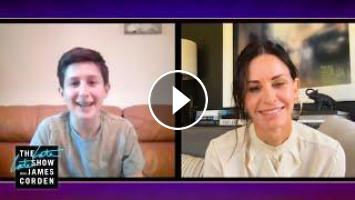 After hearing about Naftali, a 13-year-old from Borehamwood, England who had a virtual Friends-themed bar mitzvah, James Corden enlists his friend Cou...