admin
Get More Clevver Now►►
More Celebrity News ►►
First off. let’s first talk about his new ink. On Friday, the Pillowtalker shared a close up of the side of his head on Instagram with the caption, “Like I would” There you can see a Sailor Jerry style tattoo of a bird with a banner that says “M-O-M.”
Is that a tribute to his mother or something else? Well, it’s been revealed that it’s actually a nod to his new album out March 25th titled “Mind of Mine.”

It even ties together with his album work, revealed last month. The album of Mind of Mind shows of Zayn all tatted up as a little boy.
But that’s not the only fresh ink, on his neck he got two more tattoos. You can see the sparrow in his selfie and then another tattoo on the other side of his neck as seen on a music video director’s Instagram.
I don’t know about you, but I think Zayn is the king of transformations. He’s sported many different looks over the years from long hair to a short blonde buzz and pull them off pretty well.
So let me know your opinion, what do you think of the new look Zayn is sporting? Let me know in the comments below or tweet me @rudeunicorns and after that, don’t forget to click right over here to check out our brand new show on the Go90 app, Clevver Now. There, we break down the funniest, trendiest and weirdest things happening in Hollywood. Thanks so much for hanging out with me here on Clevver News, I’m your host Sarah Whittle and I’ll see you next time!
For More Clevver Visit:
Website:
Like us on Facebook:
Follow us on Twitter:
Keep up with us on Instagram:
Add us to your circles on Google+:
Tweet Me: 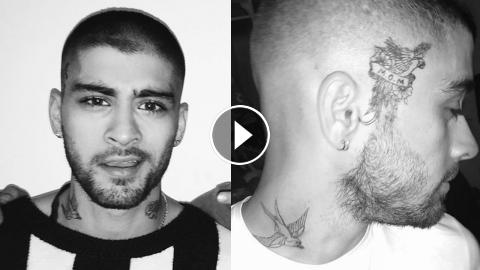 Get More Clevver Now►► More Celebrity News ►► First off. let’s first talk about his new ink. On Friday, the Pillowtalker shared a close up of the side...