Added 4 years ago by admin
95 Views
Hit the road Jack (and Jarred)! Day 4 of Ultimate Adventure 2015 was our second road day. We packed up camp in the misty hills of Harlan Kentucky, unlocked hubs (if your rig had them) and started pounding pavement. A few miles down the road we found out what the canoes that (were a requirement for UA 2015) were there for as the group pulled into a parking lot along the edge of Martins Fork Lake just south of Harlan. With that Campers unloaded their vessels and headed for the water. Canoe races were the main point (aside from the cool factor of 24 rigs with canoes on their roof), but things devolved into friendly sea (or is it lake) battles. Several of the watercrafts were capsized in the name of good old soaking wet fun. Once the canoes or other boats were dry and stowed the group headed for the Helms Ferry that crosses the Powell River that leads into Norris Dam Lake in Northern Tennessee. Once across we grabbed some ice cream from a floating store and headed down the road dodging rain storms eventually finding ourselves in Murphy, North Carolina home to the Durthamtown Tellico off-road park. Once we arrived in camp at Durhamtown at about 12:30 we got set up to catch some much needed sleep. Our dreams that night were of canoe based warfare and what tomorrow’s trails would bring.

Waking to the sound of a downpour outside our tent cot meant that we may be wet, but at least we were still alive. Despite the huge amounts of rain that fell on our makeshift camp in western North Carolina it turns out we did not drown or wash away, but would live to wheel another day. After a brief and soggy driver’s meeting our rag tag bunch of Canoeligans loaded up in our 4x4s for more trails and adventure. We followed Chuck Davis into the hallowed hills of Durhamtown Tellico. DUrhamtown Tellico is not named for our friend and UA Crony Chris Durham, but it might as well be. The park is named Durhamtown Tellico because the private owners come from the Durhamtown Off-road area in Georgia, and the name Tellico comes from the now closed public trail system that used to exist in western North Carolina. Those trails will be mourned, but at least we can still play on private land in the area. The trails and area have a definite Tellico feel and are open (for a fee) to anyone with a 4x4. Have fun and enjoy these trails as we did. For more action, videos, pictures check out 4WOR-UA.com.

Welcome, welcome to Camp Canoeligan! After a successful day on the trails of Durhamtown Tellico in the mountains of Western North Carolina it was time to hit the road to more adventure. Our end point would be South Pittsburgh, Tennessee, but there was no chance that we would get there via the most direct route. Now, if you’ve been paying attention you might expect us to visit an off-road park along the way, or at the very least find some ferry that crosses a lake or river. You would be wrong. Instead somehow the fearless Péwé found a place where a few of us could drive a tank…yep you read that right a tank. Well, maybe it’s not a tank exactly, but hey an armored personnel carrier is pretty close. Did we mention it can be driven in deep water and over junked cars. We need one for UA ’16…assuming it will do 55 or 60 mph on the highway. So we drove a tank! Don’t believe us? Well check out the video. For more action, videos, pictures check out4WOR-UA.com

Ahh, the last day of Ultimate Adventure 2015! It’s a bitter sweet day. Bitter, because the adventure is about to come to an end for the group as a whole (although many of us have hundreds if not thousands of miles to travel to get home and more adventures await). Sweet because it means that all the participants of yet another Ultimate Adventure made it to the end with only a few component fatalities. Course the action is not all over until the sun sets and Adventure Off Road Park near South Pittsburgh Tennessee would provide many a challenge for the experienced and soggy UA ’15 group. Our itinerary for the day would include slick orange clay, limestone rocks that seem to be able to bite, a BBQ lunch for all UAers, and more rocks and mud in an afternoon of dessert. While all rigs made it to the trail head of the last day not all would walk…or drive away unscathed. For more action, videos, pictures check out 4WOR-UA.com.

Catch the entire week of 2015 Ultimate Adventure on the Motor Trend Channel November 16th through November 20th with a new video premiering each day!
Event coverage and photos at:
Subscribe now to make sure you're in on all the action!
Facebook -
Twitter -
Google+
Website - & 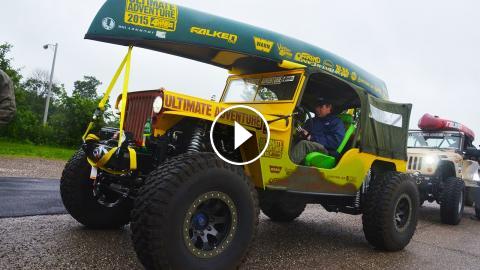 Hit the road Jack (and Jarred)! Day 4 of Ultimate Adventure 2015 was our second road day. We packed up camp in the misty hills of Harlan Kentucky, unl...