ava
James Corden connects with Adam, Jack and Ryan of AJR, who talk about performing for President Joe Biden and staying creative while in quarantine. They also help James get to the bottom of a mystery surrounding the vinyl for their upcoming album "OK Orchestra." 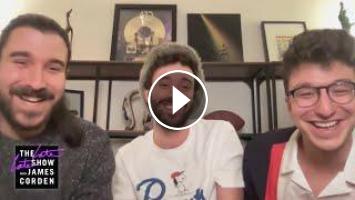 James Corden connects with Adam, Jack and Ryan of AJR, who talk about performing for President Joe Biden and staying creative while in quarantine. The...