admin
Be sure to check out The Peanuts Movie, in theaters November 6th!
A special Thank You goes out to 20th Century Fox for sponsoring this episode of News Feed.
Weird Hair Drying Towels ►►
More Celebrity News ►►
Ariana Grande just got put on blast by a TV talk show host and we are briggity breaking it down!!!
Jonathan Ross brands Ariana Grande as a Lazy F.U.C.K (his words, not mine) after she dropped out of a performance on his show.
Jonathan Ross is an English talk show host for BBC One… The host got all kinds of mad when Ari dropped out of appearing and preforming on his show called ‘Friday Night with Jonathan Ross,’ which then prompter him to call Ariana LAZY accompanied by that ugly four letter word.
While in the country promoting “Focus” the pop star was supposedly leaving a perfume launch when she then failed to make her next stop to appear on Ross’s show.
Jonathan ragged by saying QUOTE: "Ariana is in town. We were told she would be in the car at 6pm to be here for 7pm then it got to 7pm and she was not in the car – 7.30pm and she is still not in the motherf****** car. So I don't think we can hold out much hope.
Ughhh he didn’t stop there though… He continued…
"I don't know what it is. We are going to give Ariana the benefit of the doubt and not say anything mean or judgmental. I apologise to anyone who might have come along hoping to see her.
And this is where he contradicts himself… You remember just a second ago he said he wasn’t going to say anything mean… Welll, here it is…
"She was booked but the lazy little f***** has not come. Maybe she has gone to her first Nando's."
Which is a popular restaurant that basically everyone is OBSESSED with… They do have some locations in the US, but it’s funny that his suggestion is that she got distracted there!
Ari’s reps have yet to comment on why she didn’t make the scheduled appearance… But to fill her time on the show, Ross had his other guests play some Karaoke…
Soooo, it is strange that Ari didn’t show up when she WAS confirmed, that’s a little shady… but I’m one to give the benefit of the doubt and say it was for a good reason, and you never know what was really going on behind the scenes. I get that Ross was maddddd but maby he took it a little too far… Hopefully soon we will get some more details but in the meantime let me know your theories by hitting the comment section below and then click right here to check some weird hair drying tools over on Clevver Style, ALSO don’t forget to subscribe while you’re there to stay up to date on so many stylish things. I’m Ryland Adams, thanks for stopping by, I’ll see you soon!
For More Clevver Visit:
Website:
Like us on Facebook:
Follow us on Twitter:
Keep up with us on Instagram:
Add us to your circles on Google+:
Tweet Me: 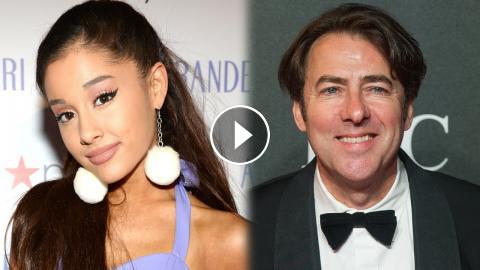 Be sure to check out The Peanuts Movie, in theaters November 6th! A special Thank You goes out to 20th Century Fox for sponsoring this episode of News...